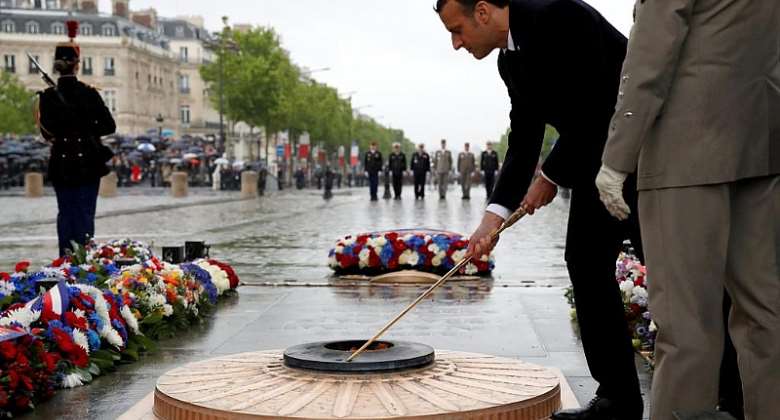 As French President Emmanuel Macron marked the 74th anniversary of the end of World War Two with a traditional ceremony in Paris on Wednesday, onlookers stressed the importance of remembering peace came at a cost.

Emmanuel Macron followed a similar agenda of commemoration since Victory in Europe Day became a French public holiday in 1981, first laying a wreath at the statue of wartime leader Charles de Gaulle before proceeding up the Champs-Elysees to the Arc de Triomphe monument.

The ceremonial rekindling of the eternal flame at the tomb of the Unknown Soldier beneath that monument was attended by veterans, resistance fighters and deportees, along with military and public officials.

While followed on national television, France's VE Day ceremonies are not designed to draw the same crowds as the annual Bastille Day military parade, for which thousands of people line the Champs-Elysees on the 14 July national holiday.

The avenue's normally teeming sidewalks were mostly empty and lined with barriers and watchful police and security personnel. The only traffic on the avenue was of the presidential and other convoys and mounted soldiers of the French Republican Guard.

Still, a few hundred people did stand in the rain to observe the ceremony from a designated area for civilians a short distance, many of them underlining the importance of marking the anniversary after nearly three quarters of a century.

“This is an important day because a number of people at some point decided they had to fight against Nazi Germany, and it's also the commemoration of many who died to save democracy,” said Jean-Claude Carrière, 57, who lives nearby.

“We tend to forget things quickly. Europe has lived in peace for nearly 75 years. There's not a lot of people today who really remember what happened.”

Visitors to the French capital made similar observations about preserving remembrance of the war as time passes, especially given concerns about the current direction of world affairs.

“It's been the longest period of peace in quite some time, and now with the storm clouds brewing in America, it's certainly something that maybe we've taken for granted for too long,” said Mike Weinheimer, 51, a Canadian man touring Europe with his son.

“Hopefully it will continue for many more years, but times are changing for sure.”

Weinheimer also observed that the nature of remembrance is changing as every year there are fewer people who lived through the Second World War.

“I think people have forgotten the horrific time, maybe we read about it but the people who lived through it are passing away,” he said. “People are more disconnected from those times.”

There were younger people in attendance though, including some drawn in part by family links.

“I have four relatives who served in World War Two. Three of them were French, they were here, they served in the resistance,” said Hannah McBride, 19, an American student spending a term in Paris.

“They're really close to my heart and I love their stories, so it's really important for me to be here,” she continued. “Our ancestry is very important… It's good not to forget that, to always remember and keep it with us.”

France is one of few European countries, along with the Czech Republic and Poland, to observe 8 May as a national holiday. Some other countries celebrate the anniversaries of their liberation on other days.