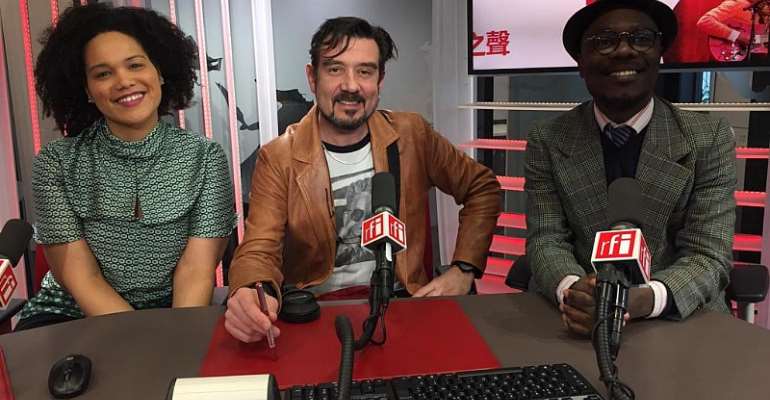 RFI English revisits the Paris Talks forum which took place at UNESCO headquarters in the French capital on March 15th. Paris Talks founder Michael Bahati and forum coordinator Keenya Hofmaier discuss the reactions, logistics and conclusions of the event that adressed "The Future of Conflict: Complex Sources and Innovative Solutions."

Following the success of this year's event, which saw over 400 participants gathered under one roof to tackle the problems of the future, Michael Bahati was upbeat, saying "Paris Talks started as a citizen-based initiative and this year it was even bigger because the stakes were much higher than last year. And next year we're going to have an even bigger one".

But how did participants feel the Paris Talks forum went this year? According to Keenya Hofmaier, "right from the start participants were face to face with the realities of our society and the future of conflict in more ways than one. Unfortunately on this day there was the massacre in New Zealand where 50 people were killed."

The news of the Christchurch attacks affected all particpants at the Paris Talks last month, and the security staff at UNESCO were also on high alert.

"Five minutes before we were supposed to start the entire UNESCO was evacuated unfortunately, because of a fire situation... so those two instances showed us how things can change in a matter of minutes, a matter of seconds... that really tied into what we were talking about during the entire conference", Hofmaier added.

But with such a vast topic to cover during the course of the day - The Future of Conflict - what were the issues that appeared to keep coming to the fore during the conference?

According to Bahati, "what I felt kept coming up, was education. How do we educate ourselves, but also how do we educate the future generations to tackle upcoming challenges?"

"Even with issues as diverse as climate change, cyber security and international terrorism," Bahati continued, "if we are to face this war of ideas which terror and terrorism brings, we have to face it through education."

Towards the end of the presentations and debates at the Paris Talks, six workshop groups ranging from between 5 to 15 people had just around two-and-a-half hours to analyze the problems and challenges presented then come up with a collective solution that best responded to those challenges.

So what solutions came out of the workshops that seemed the most innovative or striking?

According to Hofmaier, "among the more innovative or unique solutions that came up was one specifically in the preventing terrorism workshop (wih Kyle Matthews) where participants actually recommended that a global framework and code of conduct be established for the internet across all countries and societies."

Another interesting solution that emerged was from a cyber security stand-point. Hofmaier added, " it's not just a focus on children concerning cyber security and the risks, but also parents and how new cyber securities bring into question what does 'consent' actually mean for children, for individuals, for romantic partnerships... what is the importance of digital education? With them recommending that digital education take as much importance or clout in school systems as sex education, going forward in the 21st century."

And so, one month on, what is the next step for Paris Talks?

What happens with the conclusions reached at the forum? "What we've done so far is combine the challenges and recommendations that came up during those working sessions to produce what is looking like a 20-page white paper for publication in May, that we hope will spur at least further debate... and at most real policy and societal change in different parts of the world," says Hofmaier, adding "this will be a free publication for think-tanks and policy organisations that are interested and we hope to get all the voices of the participants out there."

According to both Bahati and Hofmaier, Paris Talks in its current form is set to evolve over the coming 12 months, with plans to expand to other cities, on other continents. So from 2020 we can look forward to City Talks from Paris and beyond.

It's a disgrace for NDC to celebrate 29 years of empty resul...
12 minutes ago