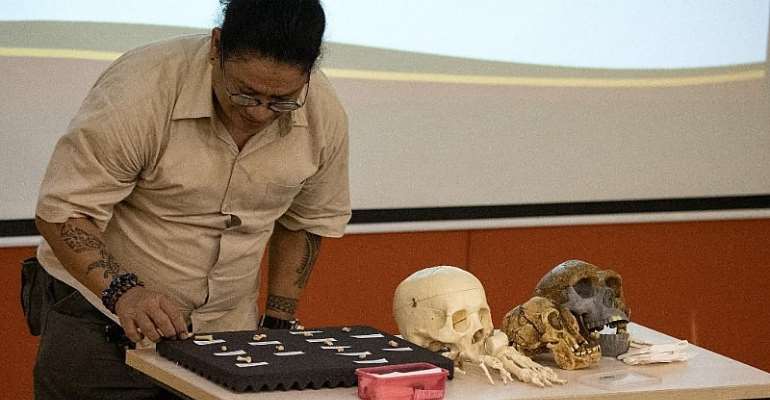 It's all happening on the science pages. In the last couple of days, we've had the first-ever image of a black hole, and now a few old bones in the east have opened a new chapter in the history of hominid species.

The black hole turns out to be a bit of a disappointment: it looks just like a hole, and it's black. Thanks guys. The yoke in question is 53 million light years away. It's at the centre of the unpoetically named galaxy, M87.

Given the blackness and the holiness of the object in question (to say nothing of its tiny size) you'd have to admit that yesterday's photograph, taken with a literally world-wide camera array, is a real achievement.

Le Figaro proudly notes that a French astrophysicist, the wonderfully named Jean-Pierre Luminet, had already drawn a sketch of the situation confirmed by yesterday's snap, back in 1979.

Keep in mind the fact that, forty years ago, J-P had to do his calculations on a steam-powered computer much less powerful that the average telephone today.

Because the machine in question, an IBM 7040, had no way of making the results visible (it had no screen) Jean-Pierre Luminet decided to sketch the results himself, laboriously transferring each point calculated from the perforated cards produced by his room-sized computer to a sheet of paper. And the result was virtually identical, in black-and-white, to yesterday's glowing orange toilet seat.

Well done that man.
Meanwhile, back on Planet Earth
But the serious science news is elsewhere. In the Philippines to be exact, where a group of French researchers have dug up the remains of a new relative of the human race, more than 60,000 years old.

This latest cousin is Homo luzonensis, named after the main Philippine island of Luzon, where the chap was found. In fact, chaps, since the handful of toes, six teeth and a bit of leg discovered by Florent Détroit of the French National Museum of Natural History appear to belong to three different individuals.

The researchers don't have much to go on. It's a bit like trying to solve a 5,000-piece jigsaw puzzle with just two pieces. But that was never going to stop these guys. If you can take a picture of a glowing toilet seat 53 million light years away, you can easily turn a few bits of bone into a new branch of the human family tree.

This ancient cousin was a bit like us because he had our small teeth, but his toe joints suggest that he didn't walk the way we do. So we're not talking immediate family.

These guys seem to be closer to Australopithecus, Lucy's relatives, who thrived in Africa between 2 and 4 million years ago. Which suggests that this branch was isolated from the rest of hominid development, since they kept at least one million-year characteristic to just 60,000 years ago.

Lord of the Rings
Which brings us to the Hobbit, a little chap who resurfaced in 2003 after about 100,000 years in the mud of Indonesia's Flores island. Homo floriensis is his full name. He also seems to have missed out on the evolutionary express, keeping archaic characteristics which were no longer mainstream. But he didn't have the same toes and teeth as the fellows from the Philippines. A different branch, in other words.

Which has led the researchers to suggest that there may have been a wide range of different island species of proto-humans, all evolving at their own speeds, but unaware of what was trending.

The fact that older remains have already been discovered in the same Philippine cave as Homo luzonensis poses another problem. There was some kind of a party or feast in the very same cave, but 600,000 years earlier.

Were the invitees the ancestors of the chaps who left their teeth, toes and shin bone behind them? Or another bunch entirely?

Just to put the time scale into perspective, scientists reckon that our people, Homo sapiens, finally separated from the Neanderthals much less long ago. And there were still Neanderthals knocking about a mere 30,000 years ago.

Paradoxically, as they say in Le Figaro, the more the scientists dig up in their search for answers to the lineage of the human race, the more questions they are obliged to ask.

Finally, black holes may not be such a bad deal after all!