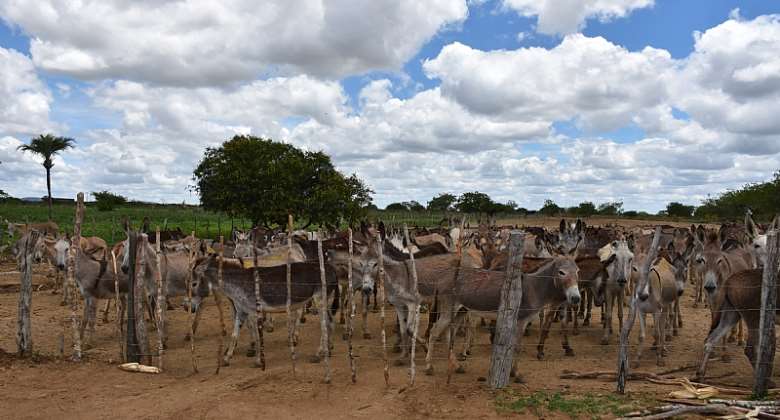 More evidence has been revealed of the suffering caused by the global trade in donkey skins, with horrific images and a video released by The Donkey Sanctuary of hundreds of starving and dying animals being hoarded prior to slaughter at a farm in Brazil.

Donkey Sanctuary vets have been providing urgent care to sick and injured donkeys at the farm in Bahia, Brazil. While hundreds have already died, their efforts have prevented the deaths of nearly 500 others, which are growing stronger and recovering. But the charity warned today that more donkeys are being hoarded and corralled at other farms and urged the authorities to take the strongest possible action to ensure that the cruelty in the trade is ended.

Police visiting the farm in early February reported donkeys dying in terrible conditions severely malnourished and stressed. Shockingly, the company leasing the farm, Cuifeng Lin, had previously been charged with similar animal neglect and cruelty at another identical facility in the same state, which The Donkey Sanctuary visited last September.

Following a court hearing on this latest case, Brazilian charity Forum Animal was awarded guardianship of the donkeys. Owing to the terrible suffering and sheer number of animals involved, Forum Animal approached The Donkey Sanctuary with an urgent request for immediate veterinary help and advice on establishing a long-term plan for the equines.

A team despatched from the charity’s international headquarters in Devon was joined by Donkey Sanctuary vets and welfare advisers from Mexico and Brazil. As feared, conditions at the farm were appalling. Most of the donkeys were severely malnourished with many laying dead or dying in the dust. Dozens of carcasses littered the site as vultures circled overhead.

Donkeys are routinely being slaughtered in huge numbers worldwide to meet the increasing demand for their skins, which are used to produce a traditional Chinese remedy called ejiao. Traders have been targeting donkey-dependent communities in Africa for the last five years to meet demand, but available supply is dwindling. They are now having to look further afield and Brazil’s large feral donkey population is being systematically targeted.

At the end of 2018, and following some horrific cases of dead and dying donkeys on other similar farms, a country-wide ban on the slaughter of donkeys for their skins came into effect. Tragically this has not stopped traders from tracking down and corralling more donkeys in the hope the ban will soon be lifted.

Simon Pope, campaigns manager at The Donkey Sanctuary who led with the team in Brazil said: “The donkeys were being kept in appalling conditions, having been transported for days in filthy, airless lorries with no food and water. We cradled small sick foals in our arms as they passed away – foals just a few weeks’ old who should never have been swept up for the skin trade, and whose mothers had rejected them due to stress, or who had died from the effects of it.

This farm is just the tip of the iceberg. While we were in Brazil, we heard of another three similar farms in the vicinity, all full of donkeys.

We spoke to senior figures in authority who said to us that they want the slaughterhouses to stay closed and for the trade to stop. But they fear that the injunction will be overturned and the slaughter will begin again. We’re determined to ensure the trade never resumes until such time as it is shown to be humane and sustainable, neither of which it is in any degree at present.”