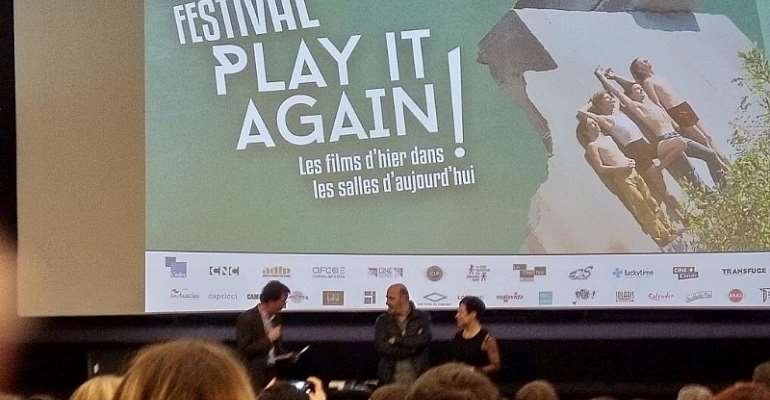 Independent or art-house cinema hall owners in France are strutting their stuff in their fifth annual week-long festival showing 16 golden oldies and called, Play It Again Sam . The name comes from a misquote attributed to Michael Kurtiz 1942 classic Casablanca. It is also the name of a Woody Allen film of 1972.

More than 150 cinemas all over the country take part and screen this special programme until 9 April 2019 organised by the ADRC, the French regional film development agency working with the Association of French Classics Distributors.

The festival kicked off in Paris at the Left-Bank cinema, the Grand Action which was overhauled in 2005 by its director, Isabelle Gibbal-Hardy, who is also president of the Independent Parisian Cinema network (CIP).

Buster Keaton's silent black and white 1923 Our Hospitality marked the occasion, accompanied by a live trio of piano, double bass and percussion. The film has been restored by French specialists, Lobster Films. The resulting effect is better than botox.

Well-known across the Atlantic, French film maker Cédric Klapisch ( When the Cat's Away , 1996, Pot Luck , 2002, My Piece of the Pie 2011 etc.) is this year's special guest partner at the Play it Again Sam Festival. He has his own connection with old films through a platform called La Cinetek which he set up with like-minded French filmmakers.

Talking about the important role in film history of movies like the almost 100 year-old Keaton opener, he said, “There's not one director on earth who doesn't see old movies. It's like food for us. You need to know, American movies, Japanese movies, Egyptian movies, Iranian movies, English movies, we also need to see silent movies, action movies, love stories.”

When the going gets tough…

As well as being a film buff, François Thirriot owns halls in the Ardennes in the east of France, and is a board member of the ADRC. One of his favourite films in this year's festival is Robert Enrico's 1965 Les Grande Gueules ( The Wise Guys ) starring Lino Ventura and Bourvil, another is Federico Fellini's La Strada.

As a 20 year-old, Thirriot hung out in the Latin Quarter where many of the independent halls are concentrated.

“It's because the area has a cultural history that these halls remain. It's irreplaceable.”

His family began their business of running cinemas in Charleville-Mézières and Sedan in the early 1900s, at around the start of World War I.

Cinema attendance has had its ups and downs since then.

Thirriot remembers after a dip about 30 years ago, things picked up significantly.

“Cinema went through terrible patch in the mid-1980s to 1990. New TV channels and video made an impact. But we kept going and invested, renovated our halls to attract people. Of course two films gave a tremendous boost to cinema, like the American Titanic and French film The Visitors . People realized that cinema wasn't old fashioned.”

He remarks that cinema isn't old hat today either.

“I think that cinema is the only place where people can go out together without fuss, and for a reasonable amount of money today. On average you pay 6 euros 50 per person.”

In the highly competitive Parisian arena, Gibbal-Hardy has introduced a more business-like approach to managing art-house cinema halls, and encouraged other members of the CIP network to run a pre-paid card valid in each cinema where they show some 300 films a year. This she said this has made a difference.

“We are a new generation who realises that we must work together to survive. It's actually a revolution!”

Some of the smaller halls may be slightly less comfortable and lacking in some of the modcons. However, watching a film in one of these theatres which have their own style is a more distinct and more personal experience, perhaps even a Parisian experience.

Alongside regular programming, 50 percent old films, 50 percent new releases, Gibbal-Hardy organises one event after another to catch film lovers' and professionals' attention, for all ages.

The Lightship , a 1985 film by Jerzy Skolimowski, starring Robert Duvall and Klaus Maria Brandenauer closes the festival on 9 April 2019 at La Grande Action cinema in Paris.