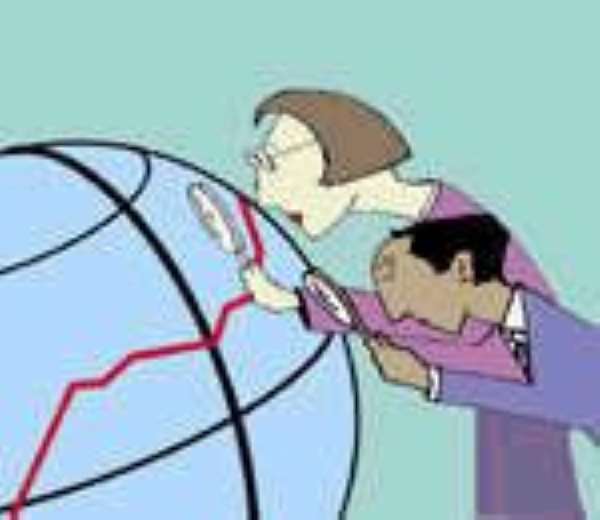 The International Monetary Fund (IMF) has cancelled all debts owed it by Ghana. The total amount involved is $381 million.

The relief, covering principal and interest and taking effect early next month, will be spread over 15 years.

Thus, Ghana is expected to receive about $37 million next year.

The IMF is the first among three multilateral bodies to have implemented the 100-per cent debt relief to 19 developing nations under the Multilateral Debt Relief Initiative (MDRI) proposed by G-8 countries in June this year.

Other multilateral bodies that will provide the relief for Ghana, which has been estimated to be more than $4 billion over the next 50 years, are the International Development Association (IDA) of the World Bank and the African Development Fund (AfDF).

The rest are Cambodia, Nicaragua, Niger, Rwanda, Tanzania, Tajikistan and Honduras.Mauritania could not make it after the final assessments.

The MDRI is granted to countries that have reached, or will eventually reach, the completion point under the IMF-World Bank Heavily Indebted Poor Countries (HIPC) Initiative.

The IMF Country Director, Mrs Alphecca Muttardy, announced at a joint news conference with the government in Accra yesterday that the international community made those resources available to help the country to make progress towards achieving the Millennium Development Goals (MDGs).

“Ghana has qualified for IMF debt relief because of its overall satisfactory recent macroeconomic performance, progress in poverty reduction and improvements in public expenditure management,” she stated.

Mrs Muttardy mentioned particularly the government's relatively strong economic growth, the significant reduction in inflation in the last three years, as well as the commendable implementation of the Ghana Poverty Reduction Strategy (GPRS).

That, she noted, had improved public expenditure management systems, freed resources for spending in areas that would induce growth and reduce poverty.

“Performance in these areas provides assurance that resources made available under the Multilateral Debt Relief Initiative will be used effectively,” Mrs Muttardy stated.

She gave the assurance that the IMF would work closely with the government to provide technical assistance and policy advice to develop a strong and stable economy as well as make sustained progress in achieving the MDGs.

The Minister of Finance and Economic Planning, Mr Kwadwo Baah-Wiredu, said going HIPC had actually helped the government to be disciplined and to implement programmes to improve the macroeconomic performance.

He declared that the feat would not make the government complacent but rather be a moral booster to make it to manage its affairs better.

Mr Baah-Wiredu said the government would not allow itself to be affected by what has become known as the “moral hazard issue” where by countries, after such creditable performance and reliefs, rather borrowed recklessly and fell back into debt in no time.

“Let us assure everybody that as a nation, which is growing, we are really responsible managers of our economy now and in the future,” he stated.

The Finance Minister said the resources would be channelled into growth areas such as agriculture, and infrastructure, roads, bridges and energy, particularly the West African Gas Pipeline Project.