French Women Scientists Push To Find Their Place At The Top 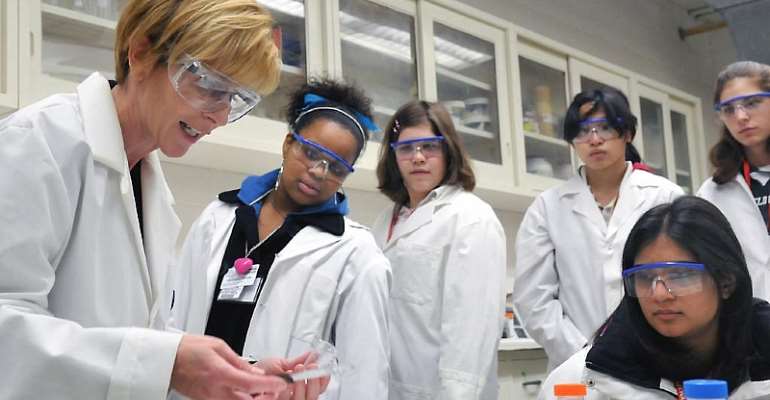 Women scientists the world over are celebrating the achievements of women as part of International Day of Women and Girls in Science. There is plenty to celebrate but in France only 20 percent of physicists and mathematicians are female. The Femmes et Sciences collective is multiplying its efforts to improve those numbers and fight stereotypes which don't encourage girls to study science in the first place.

Marie Curie is France's woman scientist par excellence. Barred from the French Academy of Sciences in 1911 because of her gender, she defied her critics by winning her 2nd Nobel Prize that same year.

But while she's feted all round, she's also allowed France to rest on its laurels somewhat.

“France for a long time thought that there was nothing to be done because we are the country of Marie Curie so she should be an example," says Nadine Hanselbladt, researcher in quantum physics and president of Femmes et Sciences. "And we have our own French scientists so we were better than anyone else. That's been the trend."

France's merit-based system has not helped women either.

“There's no positive discrimination in France," Hanselbladt continues. "The idea is that everything should come out of your own merit.”

And yet gender bias continues in the world of science.

A particularly flagrant example occurred in September 2018 at the European Organisation for Nuclear Research (Cern) when a male physicist Alessandro Strumia caused a storm saying physics was “invented and built by men” and, therefore, not suitable for women. He was subsequently suspended.

Claudine Hermann, France's first head of Polytechnic and current president of the European platform of women scientists (EPWS) is keen to point out Strumia got it wrong for a start: in the 18th century women such as Emilie du Chatelet made important contributions to physics.

“Emilie du Chatelet translated Newton into French, she made that knowledge available to the French and she was a woman," she says.”

Even younger scientists can be hostile

When leading male scientists were questioned about the fact women made up only 20 percent of physicians and mathematicians, "some were very sensitive to the problem but others reacted in a very hostile way,” she says.

“They said for instance that there was already too much being done for women."

Surprisingly perhaps, such comments weren't the preserve of the older generation of scientists.

"You think maybe it's only the older guys and that maybe it's a generation that was raised like that, and once they retire there will be hope, but no, they were younger people," regrets Hanselbladt.

"Overall, women scientists are better treated than they were 15 or 20 years ago," says Hermann. But she recognises progress is slow.

"The evolution isn't spectacular, it's very slow. Twenty-eight percent of engineers are women, and it's increasing by just around one percent per year. That's why events like today are useful because we have to be active on all fronts and keep pushing."

France's institutions are making some effort to counter sexism in science.

“Right now the Ministry [of Higher Education, Research and Innovation] is really trying to push forward some incentives to make sure that on the juries, for example, there will be women taking part," says Hanselbladt.

"And at the CNRS there is also a very active policy to make sure that at least the women who enter CNRS get an equal career. So I think they're becoming conscious about the problem."

But members of Femmes et Sciences want to speed up the pace of change. They go into schools, especially collèges, to meet 11 to 14 year olds.

"We talk about our work and what we do and how we combine the scientific career and everyday family life,” says Hanselbladt.

“We show them that stereotypes exist and can make teachers address the boys more when it's a question of new ideas and more to girls when it's about remembering what has been learned the time before."

So, however inadvertently, teachers are encouraging boys to be more inquisitive.

By the time you get to your thesis

For young women who've already made the decision to go into research and are preparing their theses, Femmes et Sciences offers a mentoring programme. It's proven "very successful in Montpellier, in Paris Saclay university and is starting this year in Toulouse", Hanselbladt says enthusiastically.

That kind of support is crucial given there's huge competition for places in France's state-funded research institutions like the CNRS.

"In France there are just over 10,000 theses defended each year and a quarter of PhD students will find a post in state-funded research which is what they all aspire to," says Claudine Hermann.

"There's huge competition. And if there are more women, then it becomes more difficult for the men, and some have a problem with that. In this competitive world it's normal that not every male scientist is supportive.”

Hanselbladt acknowledges she was helped by fellow physicist Alberto Beswick.

“He helped me a lot because he knew the system, he taught me the codes, if you like. Other women who don't get that kind of help stay behind."

One of the best jobs in the world

Despite the challenges, Halberstadt and Hermann love their careers and would encourage all girls to go into science.

“I would say 'yes go for it'," says Halberstadt. "It's very interesting work, you meet interesting people, you travel, you work in teams, and you get a good salary which means you can combine both work and family life."

Asked who her most inspirational female scientist is she says she met several female professors along the way and thought they were great.

“They looked like they knew their science and could explain it clearly and this is what I like most. But I also used males as role models. Science can be female or male, there's really no gender in it. Both can inspire you.”