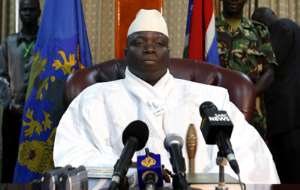 An autopsy by Sarjo Bayang
Money and material loss quickly come to mind whenever people talk about 20 years misrule in the Gambia. By the good account of time and human capital cost since the advent of military dictatorship, overall loss to the Gambia as a nation is scary to imagine.

Freezing Human Capital Stock
In all fairness with regards to the capacity building of Gambians, more people have gained employable skills and other specialized functional capabilities in the last 20 years compared to what obtained before the military rule. There are good reasons for that. It was in last 20 years that Gambia homegrown university education came to the doorstep of those who would have never had the chance. That alone opened up doors permitting considerable numbers to enroll for various degree and professional courses.

Another situation is that those who could not cope with adversities of a military dictatorship since July 1994 coup had to leave. Many of those who fled the country later discovered better use of time abroad to pursue higher education in various disciplines. It is unlikely that some of those who made advances towards capacity building pursuits abroad will choose to risk returning to the Gambia soon. With the hostile political climate reaching boiling temperatures, a good stock of Gambian human capital will remain frozen abroad. At an individual level, each person strives to achieve personal goals. By the account of national assets, some people may never return to the Gambia during their active working age.

Those who brave the political storms and prefer staying in the name of service to the nation still have limitations. The truth is that skills and abilities don’t matter in the Gambia under military dictatorship since July 1994 coup. People are given jobs not to serve but pay allegiance. From the president to rest of the public servant, work ethics are at lowest performance standards. People are afraid to be reported more about their loyalty to dictatorial powers than lower output in performance measures.

Looking at the two extreme brackets clearly indicates a situation of freezing human capital stock that is here to stay for a time. Hopefully, someday, freedom of work prevails and performance reigns over allegiance to the boss.

Spiraling Time Trap
Starting with active politicians then the nation’s youth population everyone is entangled in a time trap by the crafty design of dictatorship. To understand the nature and effectiveness of this time trap takes little thinking.

Soon after the July 1994 coup and just before gaining full control first thing that the junta conceived and put on hold was political activity. There was a total clamp down on all political activities but that did not stop the ruling junta from going into popularity shows, a scheme of deception to brainwash Gambians.

It was during that period when the junta made a loud noise about crude oil money diverted by deposed Jawara regime for personal use. It was all sensational news for people of Gambia to be told that deposed President Sir Dawda Jawara stole public money by virtue of his position. Everyone was keen to know what other skeletons remained in the cupboards of that high office. Later it turned out that the junta was just about witch hunting for a name.

While striving hard to discredit deposed President Jawara and his government for corruption and abuse of high office, the junta began other popularity campaigns. The junta leader printed his personal photo on packaging material of public health drugs as image selling scheme. Did it work for him though?

Ministers and public servants of the deposed Jawara regime have been arrested, detained, and tortured. Some of them had their properties confiscated including homes and other personal possessions.

As public attention was drawn on alleged bad dealings of deposed Jawara regime, the junta leader and his cohorts spared no time stealing public money through magnetic under hands.

In what they planned to prolong their illegal rule, the junta quickly set up kangaroo courts and bogus commissions of inquiry into alleged economic crime by deposed Jawara regime.

Political parties were banned from activity giving the military junta total monopoly to propagate their grand schemes of deception.

Quickly it emerged that little-known junior army ranks decided to resign and to become full-time politicians. Before resigning (by what the public was told) the junta cohorts promoted themselves from lower to higher military ranks. Still no political activity permitted, the junta eventually sneaked to become political leaders in a nation that did not invite them.

By holding everyone hostage, it was a smooth transition from parliamentary democracy to military dictatorship and the clock still ticks on 20 years since.

Confident that his methods of inducing fear worked so well for his interest Gambian dictator continues testing waters. Having so woefully failed the nation and people of Gambia in all regards, the next giant move of Gambia’s self-imposed life president is to be crowned king. Everyone is caught in a time trap where some people keep zipped mouths. Such is the magnitude of a political earthquake in the Gambia spanning already 20 years on gigantic time trap with devastating spiral effect while the clock still ticks on.

As nation and people of Gambia continue to experience the worst form of dictatorship amidst intolerable corruption levels at leadership the true Balance Sheet remains to be known.

Political demagogues and sycophants take to centre stage by incredible proportion. It is no longer important to be skillful or boast of talent. Those who trade on cajoling and schmoozers enjoy the best of good treats. You only needed belonging to and all doors are open.

Social capital formation of Gambia continues to experience such a decline that majority of those in public offices only stay for their pockets. Gossips and hero worship have become norms. Anyone seen to be upholding ethical work principles gets criticized and at worse alienated for doing right.

The Gambia is sinking largely because public resources are grossly abused by a bunch of social capital liabilities whose only interest is filling their deep pockets for selfish gains. Sooner or later, this state of affairs will render total breakdown almost beyond repairs.

Counterproductive Public Service
Voluntary unemployment is the term used for people on the payroll whose performance does not compensate their cost of remuneration adding all other inducements. These include people occupying high public positions where a lot of public resources are committed. Since July 1994 military coup, Gambian public sector is crowded by such people in their majority. They simply feed on resources while failing to deliver what their office duty requires. This starts from the office of the president where productivity levels reveal zero reading on the scoreboard. What makes matters even more serious is the additional damage incurred, by same people disallowing capable public servants to perform their rightful duties.

Counterproductive forces in the Gambia have gained greater power pull in the tug-of-war between genuine public servants and retrogressive individuals. For some time it appeared as though nothing mattered. In the long run, however, damage done by counterproductive public service proved fatal enough for all to see.

Nothing seems moving along the direction of improvement about this most serious problem. Yet still, it remains a taboo. The truth is best known even to those enjoying the loot. When everything falls to pieces, it takes everyone to bear the pain.

So much damage is already done. The Gambia requires full recovery from 20 years wreckage. The nation continues to experience colossal loss of finance and material resources. With equal or more serious damage to human capital and time cost in vast ways, recovery does not come by chance.

How a nation of 2 million permits one person rule so long with such damaging results is seriously baffling.

The best possible scenario is that once the military dictatorship is unseated, there are prospects more capable hands will join up to recover from 20 years wreckage.