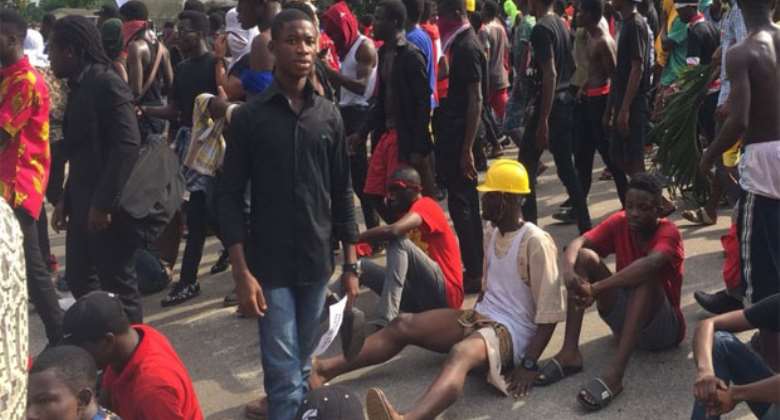 The Ghana Bar Association (GBA) has waded into the fracas at the Kwame Nkrumah University of Science and Technology (KNUST) that has led to the closure of the school.

A statement jointly issued by the President and the secretary of the association unapologetically condemned the actions of the students that led to the destruction of properties of the university.

The students of KNUST went on the rampage last Monday destroying several properties which could run into millions of Ghana Cedis.

They accused the authorities of the university of using management and campus security personnel to brutalize them.

In a statement, the GBA pointed out that it had been monitoring the ongoing impasse with disquiet and lambasted the students for their actions which led to the indefinite closure of the school.

The statement urged all the students to pursue their ambitions and education without violating the law.

The GBA did not spare the security officers and sympathized with the students who were allegedly manhandled by officers deployed to the campus to maintain law and order.

Whiles appreciating government's efforts to ensure that tranquility and congenial atmosphere is restored on the university campus, the GBA cautioned that every step of government must be in accordance with the law.

“The GBA therefore calls upon the government to resolve the impasse at the KNUST within the confines of the law and in accordance with statutes of the University. The Bar also calls upon students generally, and particularly the students of KNUST to refrain from acts of vandalism in future”, the statement said.

It also called upon security agencies to, at all times, maintain the peace without infringing the fundamental human rights of citizens and residents of Ghana and to ensure that the rule of law prevails.

Impasse
Incensed students of the university went berserk on Monday destroying anything they laid their sight on.

Vehicles, motorbikes and other items, including computers that contained important information of the school and students, were not spared.

The students, numbering thousands, were supposed to demonstrate peacefully against maltreatment they alleged the school authorities had been visiting on them.

Government subsequently dissolved the Governing Council and put in a place an interim management committee following briefs and recommendations made by the Minister for Education, Dr. Matthew Opoku Prempeh, after leading a high-powered delegation to Kumasi.

This was to make way for a new Council to be reconstituted with the Chancellor facilitating the process.

Once constituted, all interim measures will be handed to the new Council to manage. The new Council will ensure the completion of investigations, sanctions to erring parties, including students, Vice Chancellor, campus security and resumption of normal life on campus.

For now, the Vice Chancellor, Prof Kwasi Obiri-Danso, is to step aside pending the constitution of a new Council by Friday.

Crisis Meeting
The Asantehene, Otumfuo Osei Tutu II has held closed-door talks with stakeholders of KNUST to find a lasting solution to the current crisis at Ghana's foremost science university.

He is leading the peace process as tasked by the government.

Otumfuo Osei Tutu II, who doubles as the Chancellor of the university, summoned the meeting due to the violent demonstration on campus and government's subsequent dissolution of KNUST Governing Council.