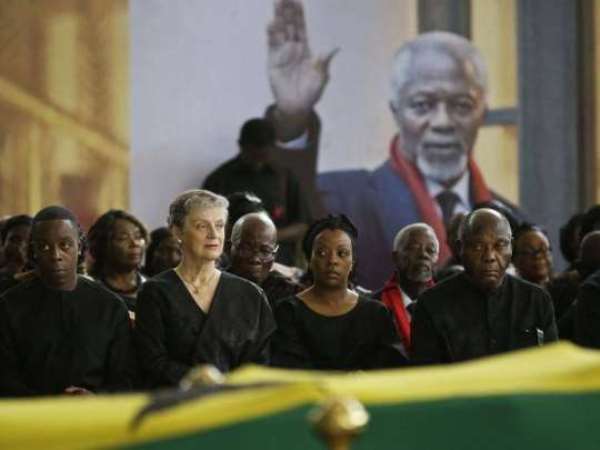 The Paternal and Maternal families of Kofi Annan, have paid glowing tributes to their beloved kin, saying they will remember him with deep respect and affection.

They said the demise of Kofi Annan, had left a deep vacuum in the family that only God could replace.

In separate tributes to the former UN Chief servant and diplomat, the families from Asanteman in the Ashanti Region and Akwamufie in the Eastern Region, respectively, described Kofi Annan as 'a giant oak tree that had fallen.'

'The Adjoa Ennim Family of Konongo Asante Akyem and the Tunyiru Stool have lost priceless jewel of a human being,' Madam Georgina Nana Adjoa Animaa Ofori, a paternal cousin of Kofi Annan, said in a tribute she read, on Wednesday, at his State funeral.

She described Kofi Annan as 'a priceless jewel, the defender of the poor, the underprivileged and the oppressed.'

Narrating the background of the first black African to head the United Nations, she said his father was Mr Henry Reginald Annan, who was the first Ghanaian to head the United African Company (UAC), and later became the chairman of the board of Directors of Ghana Commercial Bank, and also the first Ashanti Regional Commissioner under the Busia Regime.

'It is no wonder that his son could rise to this level of greatness and prominence, endured with outstanding qualities and amazing energy'.

'It is gratifying to note that in whatsoever capacity he found himself, even as an ordinary member of the family, Kofi Atta performed his duties with distinction and low key humility. His deep and abiding faith in humility remained the pivot of his life up until his death'.

'As a person he abhorred greed and arrogance, vain pride and exploitation. He could have used his position to amass personal wealth but he resisted the temptation and remained a simple man.'

Madam Anima said, 'Those who were privileged to be associated with him pay glowing testimony to his sterling quality. He was firm and he loved to fight for justice'.

She said the family believed that it was those extraordinary qualities, which he displayed consistently that made the Asantehene, Otumfuo Osei Tutu II, to bestow on him, the title of Busumuru in August 2002.

The honour, she said, elevated him to a much prominent status in the eyes of the family and Asanteman, and in the whole of the country and the world at large.

His favourite saying, she said, was: 'The future no eyes can see; what will be will be-que sera sera...'

'This quote of his, confirmed his steady rise to the most elevated and coveted status of the Secretary General of the United Nations, a position he held for two consecutive terms.'

A representative of the Oyoko Abusua (Maternal family) of Akwamu said they saw the loss of their son as a big loss to the world, explaining that, 'Kofi Annan as an Abusuapanin of the Family, was a pride of the entire family and Akwamuman'.

Nane Maria Lagergren, Kofi Annan's widow and their three children, Kojo, Ama and Nina, had joined the nation to mourn the selfless man who put Ghana's name so high on the world map.

Many dignitaries, including members of Parliament, some diplomats, representatives from the UN, politicians, the clergy, media representatives, traditional rulers and other individuals, thronged the AICC to pay their last respects to the global peace icon and humanitarianilist.