Honouring Kofi Annan: Tribute By The University of Ghana 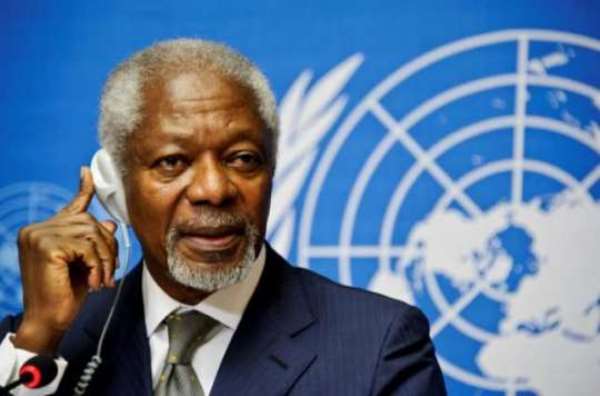 'Now praise we great and famous men,
The fathers named in story;
And praise the Lord who now as then
Reveals in man his glory.'
William George Tarrant (1853-1928)
It is with a heavy heart that we pay tribute to one of Ghana's most illustrious sons and arguably one of the most decorated men the world has ever produced.

The University received news of the passing of our immediate past Chancellor, Mr. Kofi Annan, with great shock and disbelief. This was because on August 1, 2018 we all eagerly looked forward to witnessing his handing over to his successor, Mrs. Mary Chinery-Hesse at the Investiture and Swearing-in ceremony, after successfully serving his 10-year tenure as Chancellor of the University. Even though we were disappointed at his inability to attend the investiture due to ill health, we never in our wildest imagination envisaged news of his sudden demise.

Indeed, we at the University of Ghana are very proud of him. Our pride is further heightened that he accepted to be our Chancellor and gave us the wings to soar among our peers, as an institution of higher learning. It was therefore not surprising that at the recent investiture ceremony of Mr. Annan's successor, Nana Addo Dankwa Akufo-Addo, President of the Republic, described Mr. Kofi Annan as "one of Ghana's most illustrious sons under whose stewardship the University attained the rank as one of the best universities in Africa".

Besides performing his official duties as Chancellor, Mr. Annan made several contributions to the development of the University. He was instrumental in attracting numerous funding sources to the university especially in the areas of faculty research, agricultural research, library resources, and ICT development. Notable among them were the UN-Carnegie Next Generation of Academics in Africa project geared towards faculty development and the enhancement of the University's capacity in research and post-graduate training; the Building Capacity to Meet the Climate Change Challenge (B4C) Project, support from the Open Society Foundation, among many others.

Mr. Annan played a major advisory role where he discussed the growth of the University with the other Principal Officers. He maximized every opportunity to meet with the various Chairmen of Council and Vice-Chancellors, to the extent possible, to give advice on the future direction of the University. Indeed, the unparalleled personality of Mr. Annan helped uplift the University of Ghana to worldwide recognition; granted the University much credibility and greatly assisted the University to advance its strategic agenda.

As Board Chair of the Alliance for a Green Revolution in Africa (AGRA), Mr. Annan, on learning about the PhD programme in plant breeding at the West Africa Centre of Crop Improvement (WACCI), at the University of Ghana, took keen interest in the programme and visited the Centre on July 30, 2008 to have conversations on the African Green Revolution. This was even before he assumed office as Chancellor. He spent some time to inspect the fields, and discussed research on food and nutrition security with the Directors and faculty at WACCI. This visit gave the much-needed visibility to WACCI.

The University of Ghana is truly honoured to be associated with this global icon, who served humanity as best as he could. Mr. Annan demonstrated true servant and selfless leadership, always wishing the best for his nation and the world. A true peace maker he was. Mr. Annan will be remembered as a man of principle and gentle disposition. Indeed, the University of Ghana and the world have lost a distinguished leader who was incomparable in all respects.

Mr. Kofi Annan was a strong tower and worthy vessel from which the University drew a lot of wisdom and inspiration. He took a strong interest in the University's activities, and provided a strong backbone during some of the turbulent times of the University. Mr. Annan called frequently to check on the state of the University, and regularly assured us of his unflinching support.

The University mourns with the wider family of Mr. Annan, even as our hearts go out to his devoted wife, Nane, his children, colleagues and friends.

We shall cling to the memory of his life, his avowed passion for the University, and his legacy. May the torch he lit continue to burn ever more brightly as a memorial to his hard work and concern for humanity.

May the soul of Mr. Kofi Annan, our former Chancellor, find eternal repose.

'So praise we great and famous men,
The fathers named in story;
And praise the Lord who now as then
Reveals in man his glory.'
William George Tarrant (1853-1928)
Prof. Ebenezer Oduro Owusu, Vice-Chancellor
On behalf of University of Ghana
Kofi Annan was the immediate past Chancellor of the University of Ghana, having served for 10 years.