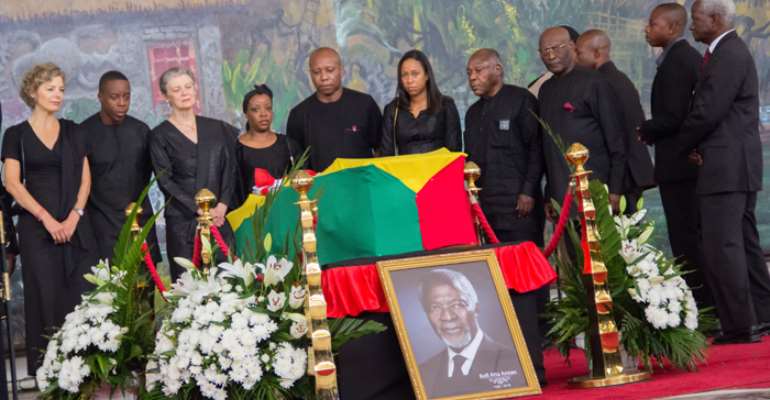 The funeral of former Secretary-General of the United Nations (UN), Kofi Annan, continued yesterday, with prominent persons, both locally and internationally, paying their last respects to the celebrated Ghanaian international diplomat.

The wife, Nane Maria Annan and children joined family members from Konongo in the Ashanti Region and Akwamufie in the Eastern Region to mourn the death of their respected son, father and husband amidst tears.

Foreign dignitaries, diplomats, ministers, parliamentarians, members of the Council of State also filed past the body.

Nane Maria Annan shed tears after filing past the body of her husband and exchanging pleasantries with his patrilineal family.

The members of the patrilineal family also paid glowing tribute to their son amid tears.

The family later gathered around the casket containing the body of the former UN chief which was draped in the Ghana flag and prayed over it.

Old boys of Mfantsipim School in Cape Coast, where the former UN Secretary-General had his secondary education and completed in 1957 also brought a lot of emotions to the foyer of the Accra International Conference Centre.

They gathered around the casket and delivered a powerful rendition of the school's anthem and hymn under the direction of Solomon Wiredu to bid him farewell.

The spokesperson for the patrilineal family, Georgina Darling Ofori, said they had lost a very important member of the family who cannot be replaced.

According to her, the father of the late Kofi Annan, Henry Reginald Annan, who traces his roots to Odonase in the Central Region, was also a very prominent person in the Gold Coast who inculcated in the late Kofi Annan the spirit of humility even though they came from a very rich background.

He said the late Kofi Annan was always humble, fair-minded and fought for justice for the underprivileged in the society.

It was revealed in the tribute that the father of the late Kofi Annan was the first Ashanti Regional Commissioner under former Prime Minister, Dr K.A. Busia, and was a staunch member of the Progress Party (UP).

According to him, he was openly opposed to the Convention Peoples' Party (CPP) administration led by Dr Kwame Nkrumah, adding that he was known in school as 'Dombo' which meant 'opposition.'

The Defence Minister, Dominic Nitiwul, told DAILY GUIDE yesterday that Kofi Annan's contribution towards global peace, which culminated in the award of Noble Peace Prize in 2002, would forever remain as his legacy.

He said through the diplomacy of the late Kofi Annan, the UN brought peace to war-torn countries in Africa like Rwanda, Burundi, Democratic Republic of Congo, Cote d'Ivoire, Liberia and Sierra Leone.

The National Democratic Congress (NDC) Member of Parliament (MP) for Cape Coast South, who is vying for his party's flagbearership position, Kweku Ricketts-Hagan, told the paper that Kofi Annan was a unique diplomat who used diplomacy to achieve peace.

He urged Ghanaian politicians to emulate the example of the late Kofi Annan by humbly serving the interest of the people.

Officials of the NDC, led by the General Secretary, Asiedu Nketia, also paid their last respects to the distinguished Ghanaian, yesterday.

NDC flagbearer aspirant, Goosie Tannoh, was also there to pay his last respects.

A Thanksgiving Service would be held today for the late Kofi Annan at the main auditorium of the Accra International Conference Centre where President Akufo-Addo would be in attendance.

After that, the body would be conveyed to the Burma Camp Military Cemetery for final interment.

Flags At Half Mast
Meanwhile, President Akufo-Addo has directed that all flags in the country should fly at half mast today.

According to Pius Hadzide, Deputy Minister of Information, the decision was taken to honour the memory of the illustrious son of the land.