It Must Be Freddie Blay For National Chairman 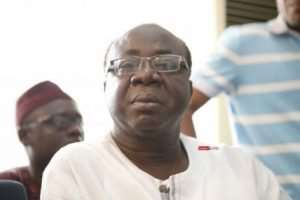 Next month members and sympathizers of the New Patriotic Party (NPP) will congregate at Koforidua to elect national officers who will steer the affairs of the NPP for the next 4 years. Several party faithful have already gone through various processes and qualified to contest various positions in our party.

I will be expressing my views on the other positions in subsequent write-ups but for today am concentrating on the position of national chairman of our party and who I think is the very best for the position. The chairman is symbolically the driver of the party and it is expected that the elected candidate will have a very solid and rich political experience to be able to manage a party like the NPP efficiently and effectively and also prepare it for the next general election in 2020.

Three persons are contesting for the position of the national chairmanship race but my attention is on Hon Freddie Blay. I must say that when Chairman Blay first contested for the position of First Vice chairman of the NPP in the last delegates conference of the NPP which took place in Tamale, I was his campaign coordinator for the three Northern Regions. I can therefore say that I know Freddie Blay satisfactorily and can articulate some views on why he must be the one to occupy that position.

First of all, I am not going to elaborate on positions he held in the past and how he distinguished himself in those positions in the political history of Ghana. I only will say that he was MP for Elembelle in the Western Region for three terms during which time he served as the Chairman of the Appointments Committee of parliament after having also served as both the Second and First Deputy Speaker of the August House.

What is worth noting about the above track record is that as a National Chairman, he would have had an idea about what it takes to win more Parliamentary seats for the NPP including the strategies to deploy having himself ever taken part and won competitive elections in the past. He will understand better the problems and needs of party folks from the polling station to the national levels. This will be positive for the NPP in the next elections.

Secondly, as someone who served as the First Vice Chairman and subsequently as the acting National Chairman of the NPP thereby leading the party into victory in election 2016, what it means is that over the years and period that he served in those positions, he served as the father of the party in the country and his willingness and readiness to listen to party folks from across the country in terms of their individual and party problems gives him an exclusive experience that is not available to his other competitors.

After he won power for the NPP in the last election, it is my considered view that he is voted as the certified National Chairman to drive the party with his unique and customized strategies into election 2020. As the saying goes: “You don't change a winner”. He won election 2016 for us and it is only natural that we vote to let him stay to continue to bring his experience to bear on the fortunes of the NPP.

Chairman Blay is the only person from among those contesting for that position who has a clear strategy on how to resource all 275 constituencies in the country financially and logistically to strengthen its structures for more victories of the NPP at all levels. The “One Constituency, One Commercial Bus” strategy he is espousing is the very best for the NPP in terms of winning more Presidential and Parliamentary votes and local level financing.

The position of National Chairman requires someone who can serve as a father to the young, an inspiration to his colleagues and above all, someone who knowns how to manage all kinds of information in the interest of the party. Chairman Blay has over the years proved that he fits this requirements amply.

The Daily Guide newspaper and the Blay and Associates law firm have in the past and even now put at the disposal of NPP faithful, their services offering not only positive publicity to the party but also using his private properties to serve the interest of the NPP.

Having once served as a Parliamentary Candidate of the NPP myself, I know the effect of a good National Chairman on the fortunes of the party at the grassroots level. Chairman Blay is simple, approachable, proactive, available and above all, helpful to party activists and these attributes would impact positively on the NPP when he is elected as the next chairman of the NPP next month.

The NPP under President Nana Akufo Addo is doing well in terms of fulfilling its pre-election promises to Ghanaians but that not withstanding, the party will need someone with the track record of winning Presidential elections for the NPP and Blay is the man. If it must be a National Chairman, then it must be Freddie Worsemao Blay.