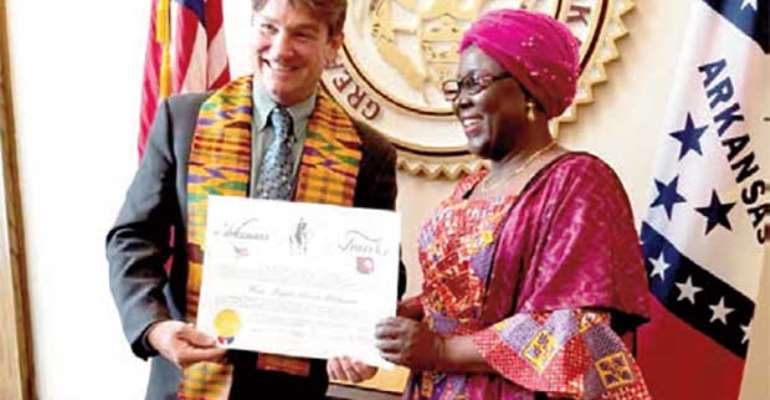 The State of Arkansas in the United States of America has conferred a goodwill ambassador title on Local Government and Rural Development Minister, Hajia Alima Mahama, who is leading the government delegation to the US.

The award was presented when she paid a courtesy call on the Secretary of State for the State of Arkansas, Mark Martin in Little Rock, at the State capital.

Arkansas State is the home state of Bill Clinton, who was once the State Governor from where he rose to become the US President.

Hajia Alima is representing President Akufo-Addo, who had been invited for a state visit by Governor Asa Hutchinson to attend the 84th annual convention of Arkansas Municipal League on Sister Cities' Sustainable Economic Development where he was billed to deliver the keynote address.

Presenting the citation to the Local Government minister, accompanied by her deputy, OB Amoah, Mark Martin said the State finds her worthy of an ambassador thus conferring the title 'Arkansas Traveler' on her.

The citation reads: “To all who shall see these presents, greetings: Know ye that the Governor of the State of Arkansas in the name and by the authorities of the people of the said State, as vested in him by the constitution and laws of the State of Arkansas, reposing special recognition for distinguished accomplishments, does hereby appoint and commissioned Hon Hajia Alima Mahama as an Arkansas Traveler who is hereby authorized and commissioned to serve as an Ambassador of Goodwill from Arkansas to the people of other States, the people of nations beyond the borders of the United States or wherever this Ambassador of Arkansas may hereafter travel or reside.”

Secretary of State, Martin said the State of Arkansas was ready to do business with Ghana, especially in the area of agribusiness.

Hajia Mahama expressed her gratitude for the honour accorded her.

Other members of the delegation were also presented with certificates for their visit.

From Fortune Alimi, Little Rock, US