Kumasi In The Lead Of Cancer Control & Treatment In Africa 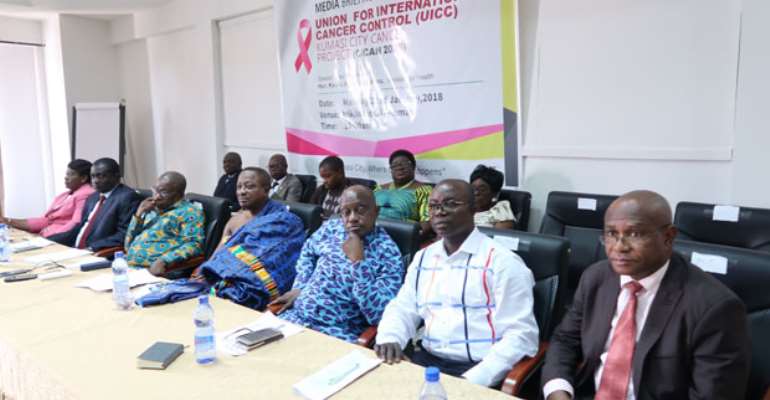 The Kumasi Metropolis will in the years ahead become a hub in the effective control and treatment of cancer on the African continent.

This is because Kumasi has become the first city in Africa and the fourth in the world to be selected to be part of the Union for International Cancer Control (UICC) City Cancer Project (C/CAN 2025).

Announcing this, the Minister of Health, Kwaku Agyeman Manu, noted that the selection of Kumasi is a good omen for Ghana in particular and Africa in general.

Speaking at a well-attended media briefing in Kumasi on Monday, the minister, who was beaming with smiles, stated that the selection of Kumasi as African Key Learning City in Cancer would bring numerous benefits to the country.

For instance, he stated that Kumasi and for that matter Ghana, would easily get access to latest medical knowledge about effective treatment of cancers of all forms which would lead to the preservation of human lives.

He said Kumasi would also get financial support from the UICC and other allied agencies, regarding the fight against cancers, as well as medical personnel.

C/CAN 2025 Project
The City Cancer Challenge (C/CAN 2025) signals a paradigm shift in the way international organizations will help country and city leaders to tackle the growing burden of cancers and also reduce cancer-related deaths by 2025.

The C/CAN 2025 is also a multi-sectorial initiative, which is supporting cities to take the lead in the design, planning and implementation of cancer treatment solutions. The project seeks to increase people's access to cancer treatment in the cities.

Kumasi, which submitted a well written proposal, was selected to be part of the C/CAN 2025 project during the World Cancer Leader's Summit-2017 in Mexico.

Kumasi Mayor Osei Assibey Antwi, the Ashanti Regional Minister, Simon Osei Mensah and Dr Kwaku Agyeman Manu were present in Mexico when Kumasi was selected from other vibrant cities across the globe.

K'si Mayor
Mr Osei Assibey Antwi commended all those who played key roles in helping to make the Kumasi City Cancer Project (C/CAN 2025) a reality, adding that the project would lead to the preservation of lives.

In order to make the project achieve its aim, he said, “The KMA has undertaken to provide a secretariat to begin with, and to have a city manager appointed to serve as the liaison officer between Kumasi City and UICC.”

Mr Osei Assibey commended President Akufo-Addo, the Asantehene, Otumfuo Osei Tutu II, the Health Minister, and other dignitaries for their support, which has enabled Kumasi to be selected to be part of the C/CAN 2025.

The Ashanti Regional Minister, Simon Osei Mensah, in his succinct remarks, stated that Kumasi was selected because the city boasts of leaders who appreciate what it (city) needs to develop.

Sounding confident, he stated categorically that the Kumasi City Cancer Project would succeed and called for support from all, especially the media, to publicize the project.