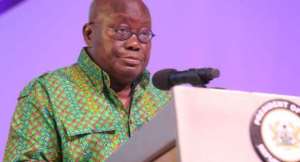 President Nana Addo Dankwa Akufo-Addo on Friday cut the sod for the commencement of the Marine Drive Tourism Investment Project, expected to generate some 150,000 jobs for Ghanaians.

The project, estimated to cost some 1.5 billion US dollars, is situated on a total of 241 acres of prime beach front land, stretching from the Osu Christianborg Castle right to the Arts Centre, is a Public-Private Partnership geared towards boosting tourism, creating jobs for the youth, especially those within the catchment area, and increase economic growth.

At a brief ceremony at the Marine Drive, behind the Independence Square in Accra, President Akufo-Addo expressed appreciation to stakeholders, who helped ensure that the project came to fruition.

He was optimistic that the Marine Drive Tourism Enclave would be completed within the stipulated construction period.

'I am confident that all of us, gathered here, will be present again here, very soon, for the commissioning of this project', he added.

The project, which has been on the drawing board since Ghana's Independence era, is aimed at developing the coastlines of Accra. It would be a tourism hub for investors and tourist.

The Ministry of Tourism, Arts and Culture is the lead implementation agency. The project would be executed by two anchor developers-Attachy Constructions and Fridough Limited.

President Akufo-Addo said the project is a realisation of a pledge he and his party, the New Patriotic Party (NPP) made in the run- up to the 2016 elections, to revive the country's tourism sector.

'Today, we begin the realization of this pledge, with the construction of the Marine Drive Tourism Investment Project.

"We are all aware how countries all over the world, particularly our neighbours in West Africa, have made good use of their beachfronts, and, as a result, rake in considerable revenues for the development of their communities and countries. We intend to go down that path,' the President said.

The President was happy that, inspite of the many unsuccessful efforts to implement the project since its conception some six decades ago," today, we are beginning this project.'

'It is noteworthy, also, that the required consultations have been done prior to this ceremony. I am happy to hear that the Chiefs have given their full support to the project, and that their concerns have been addressed.'

President Akufo-Addo commended the planners of the project for not considering only the economic aspect, but also ensuring that the interest of the public was factored into the design. Typical of projects such as this, planners, most often than not, consider only the economic or financial benefits.

'They have put in place a network of well-connected, multi-use public spaces that fit with the surrounding communities' he noted.

The architects have also included in the project, a Theme Park, in honour of the founding fathers of our Ghana, to celebrate their contributions to the liberation of the country from colonialist.