Jacob Zuma Is The Big Brother Of SADEC 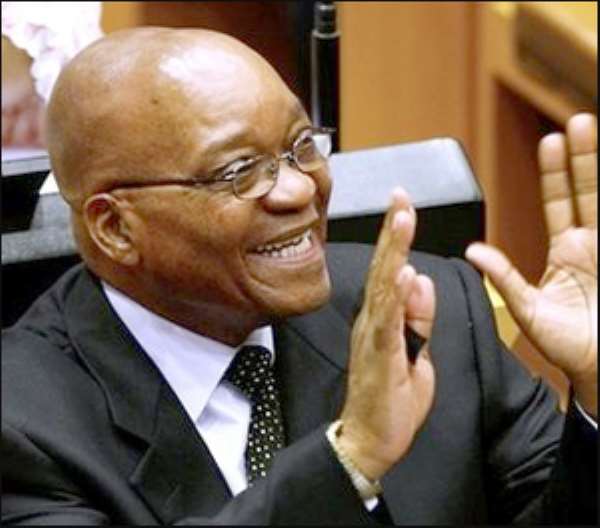 Zuma went on to add that he is sending a fact finding South African government ministers, as delegation of "South Africa" to Zimbabwe, who shall be reporting back to him. What this speeches and actions are implying is, South Africa is synonymous with SADEC and president Zuma, is as well the president of the South African regional body. So, the SADEC Commission does not exist to serve as the institution responsible for what happen in the member states and how such challenges are address. Rather, some mysterious authority has been vested on South Africa to be in charge of other SADEC members. We therefore end up with anyone the South Africans elect as their president to naturally assume the responsibility of the life of everyone in the region, than just being the president of South Africa.

Since this phenomenon is not unique to just SADEC but obvious with ECOWAS (Economic Community of West African States), the MAGRIB, and The EAEC (East African Economic Community), one is forced to ask whether this was the AU grand scheme to Continentsl devolution of powers to the the regions, when it is clear that the AU's approach has failed at the Continentsl level?

What this tend to portray is, the powerful countries whose power tussle at the AU level is making it impossible for the Commission of the AU to be fully in charge of its programmes for the continent, are being decentralised to five regional levels to reduce pressure on the centre. Interestingly enough, the problem at the AU level still remain while the Big Brothers of the regional bodies are playing the role of the neutral referee and team players in the regional eco-political games.

We phrase up this approach of regionalization of the African continent as "Another colonization of the people of the smaller African countries by the people of the powerful countries of Africa". So what is happening is, in place of the neutral and independent heads of the respective regional commissions being the ones in charge, weaker commissions were created to allow the big Brothers elected by the citizens of their respective countries to dominated the working of the regional bodies.

The countries that are evident in this regional recolonization are; South Africa, Nigeria, Kenya and Egypt. One will expect DRC (Democratic Republic Of Congo) to play such role in the Central Africa Economic Community but the entire region being plague by wars, is making that impossible. We are therefore not expecting anything different in the Central African Region when the area eventually overcome its on going challenges.

We should not confuse ourselves of having everyone standing by, doing nothing when there is an urgent need for a leadership role to come into play when there is an emergency. There is clearly the need for someone to take the leadership role in time of crisis among a people and the role South Africa is playing is right within expectation, given the circumstances we are faced with.

The Zimbabwean challenge is very unfortunate and it is a subject that seem to have divided opinion across the continent of Africa. Given the lack of clarity on whether we are dealing with a military Coup or a legitimate transition, there call for external response to help the Zimbabweans get their country back on course, as we are all unanimous against military interruption of what we all believe a civilian rule. The big question we are all failing to ask is, who is the best to be the spokes person for SADEC, if the regional body is not the same as South Africa? We must be mature and broad minded in our discuss to ask for why SADEC is incapable of speaking for herself, than having the South African President speaking on behalf of SADEC? Is it fair for the people of South Africa to elected their president, just as the people of Zimbabwe elect their president, and and the president of South Africa assuming the responsibility of everyone in the region that includes the people of Zimbabwe, in time of crisis like this? What about if South Africa is the one in crisis, as she is a country like any other member state of SADEC?

Some of us have always compare this big brother saga to a footall game. The role of the SADEC Commission and its president, is like the role of referee in an FA (Football Association) league. Because all the teams are playing to win, it is wrong for any team captain to also act as a referee in any match. The referee is suppose of be a professional employee working for the FA as an authority. The referee must be strong, neutral and none of the football players or team captain. Since everyone one is playing to win, the referee who is also a captain of one of the teams, is naturally inclined to work for his team, to always win.

I do not know whether SADEC has a Commission like we do in ECOWAS (Economic Community of West African States), talkless of who the SADEC president is by name. But, I am not daft not to know that President Jaccob Zuma of South Africa, is not doubling up as the President of the SADEC Commission. I know very well that in in ECOWAS, who ever the Nigerians elect in their questionable election, ends up jumping about as the ECOWAS boss. I know we have the ECOWAS Commission under the leadership of President Marcel Alan De Sueza, who is struggling with President Mohamadu Buhari on regional issues, due to the weak nature of the ECOWAS authority. So instead of the president De Seuzi acting as the impartial referee of the ECOWAS political and economic games, president Buhari with his Nigerian team employ their economic and political might to have the regional body work their way.

We in ECOWAS are calling for a reform of the West African Union, with a clearly neutral, stronger and independent ECOWAS Commission. We believe that this problem of making the West African regional body weak in it role, is due to lack of ECOWAS with its own directly elected members of regional Parliament, to make laws for all of us. So, in order for the people of ECOWAS to have a more proactive regional authority under the rule of law, we have no choice of avoiding the mockery of having a player cum team captain speak in a match, while the referee look dumb. Mr. Zuma had rather shut up on the Zimbabwean crisis and have the president of the SADEC Commission speak. The big question is, whether SADEC Commission has an independent authority figure than the South African president?