Youth Dialogue With Sheikh Mohammed Awal; Notes From My Sheet Of Paper 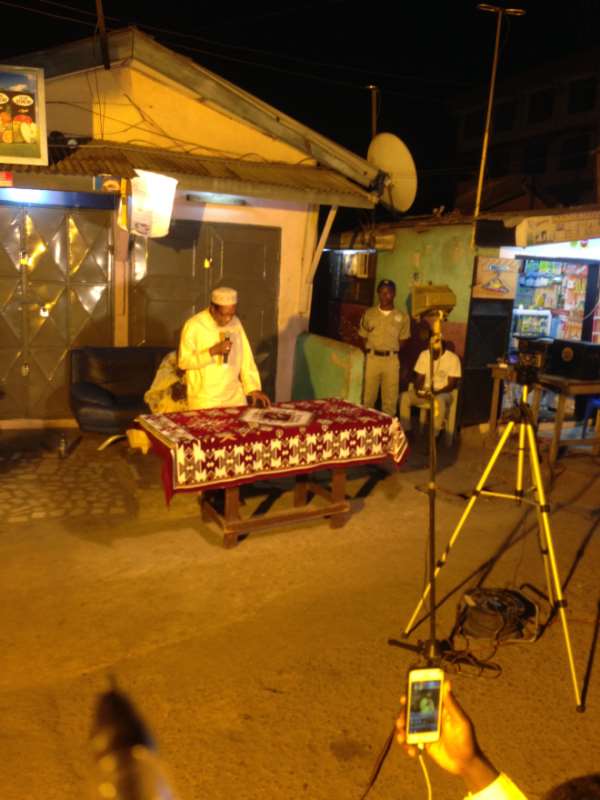 The first President of Ghana built many institutions of learning during his nine years tenure as the nation’s leader. In building those institutions, he “insisted that staffs and students of all places of learning and research should keep in close touch with the life of the people. There should be constant contacts between them and the public in the form of open lectures, discussions, and other joint activities. The make-up of new knowledge available to the people as a whole was just as important as the acquisition of it.” Great.

Ever since I came across this, I have made a conscious effort in ensuring that the productive programmes we organize in our communities are staged in the heart of town and not at its outskirts as we always did so that the real people, the grassroots will also have their share of the knowledge that will be shared. More especially, they are in need of such programmes more than most of the participants who could just be termed as the “choir.” Preaching to the “choir alone will not yield maximum fruits unless the message goes beyond them to the masses, the proletariat in economic terms.

Hence, I jumped in agreement when two brothers shared the idea with me that we are hosting the renowned, erudite and world-wide acclaimed International Islamic Scholar, Sheikh Mohammed Awal in the streets of Nima. Straightaway, I moved to also begin inviting friends and families by word of mouth and more by my Facebook handle.

The programme came off yesternight. And it is the single most profound programme that has had a profound impact in me in recent times. One participant told me after closing that the dosage of message was not okay for him. He needs more. This was because of the profundity of knowledge share, the intensity of spiritual upliftment offered and the wide range of horizon broadened.

After two of our youth delivered great messages to serve as a curtain-raiser for the crux of the gathering, the main speaker himself zoomed into action.

After the usual Islamic courtesies, he began by telling us about his roots. “I’m a Zongo boy. I’m a Fulani and Hausa. My grandfather is the first to leave Bauchi in Nigeria to settle in Cape Coast in Ghana. He sold meat and Kola-nut. I had my primary education in Ghana. Proceeded to do my secondary Education in Nigeria. I then furthered at the Kaduna Polytechnic over there.” This sealed a question that was posed to him later in the programme about his nationality.

However, he stated that though he ascribes to his tribal roots for the sake of identity, he has never failed to uphold the fact Islam binds us together and makes us all cut from the same loin. “But the ultimate is I’m a Muslim”, he hinted.

He hinted that there are different forms of religions. Some worship stones, some, animals. Some worship stuff that will boggle and baffle our minds. In his travels, he encountered a people worshiping a very big tree. He also joined some to better appreciate their activities. “In 1992, I joined a religion called Satanism. I wanted to unravel the mystery surrounding their belief. Their leader was a woman clad in red with a tail and a big book called “The Book of Satan”, I believe he was referring to The Satanic Bible.”

The highlight for me was when he began talking about the need to nourish the brain. What else do you think will enthrall me the most? Afterall, “when the moon is shining, the cripple becomes angry for a walk”, so sayeth our elders. I love reading and like any presentation that touches on it; the call towards civilization.He started by citing the fact that Allah distinguished and elevated man over animal with the human brain. We can use and harness the brain power to get what we want. He drew an analogy where no matter how sophisticated a sheep is, it can never lead another on a tether but he has seen a 5-year old boy in the Amazon leading an elephant on. Therefore, man must endeavor to nourish his brain with knowledge. “Knowledge is the foremost. Knowledge is the everything. Knowledge is the key that unlocks the mysteries of life”, he poignantly stated.

To give an example with himself, he narrated. “I left Africa to the United States of America in 1984 to search for money, to buy a new car, build a big mansion. I went there with material inclination. One day after praying in a particular mosque, the imam made an announcement that changed my life entirely. He announced that if anyone wants to meet the great scholar, Ahmed Deedat, he’s here. I was like “Deedat”! I have watched his cassettes, listened to his lectures and followed his debates. I struck a conversation with him and I told him I want to be like him. He responded that I can’t be like him. He quizzed “have you ever heard of any other Ahmed Hoosen Deedat from Gujarati”? I responded in the negative.

He therefore told me, just like there’s no other Mohammed Awal from Cape Coast with such and such mum and dad; there will be no any other Deedat. We are all unique; no one can be like the other. So I should sharpen my own personality. I then told myself; well I have gotten a new job then.I began to read. I read, I read, I read till the extent that my friends called my mum to tell her I’m lazy, I’m indolent. And that whilst they are chasing money, I spend the whole day reading papers. I told my mum, since I see to her upkeep and I have never failed her in my obligations, she should not heed to their calls.

I left New York to Seattle, Washington so I can have my peace and study. Today, those friends adore me and hold me in a profoundly high esteem. They tell me I am the best thing that ever happened to them. The search for knowledge has been my profession since then. I travel all over the world now. Fly Business Class on my flights, sleep in 20-star hotels and do things my friends would only dream of. I am not bragging, but making things real to you. If you have knowledge, everybody wants a piece of you.” He stated confidently.

With a bit of wit, the elder brother of humor, he stated “every time we go to bed, my wife (who was there yesterday to give him strength) spends about five minutes to clear the bed that has been littered with books. She sometimes complains and I tell her, that is my life. You married a book worm. I eat books. I spend so much of my time reading books.”

He then proceeded to talk about the community. He lamented the fact that we waste a whole lot of resources on activities which in the grand scheme of things do not matter. He underscored the need to use the overwhelming energy at our disposal to propel ourselves into the next millennium. “Changing ourselves begin with ourselves. Look at the beauty of this community. We have energy. We have everything. All we need is to harness it.”

He took us into the dim recesses of time by talking about how Muslims championed the developmental strives of the world in the early centuries. “Muslims were doing wonders in 8th, 9th, 10 centuries. The lingua franca in the world then was Arabic. The Europeans were living in cages. They took no shower.”

He mentioned the fact that some very important inventions were done by Muslims long before the other part of the word began controlling things.

He never left without touching on the issues bordering our queens and empresses. Our ladies. The custodians of our homes and our suns that never set. He believed that the education of man alone has led to massive corruption in the world. Untold hardships, devastating wars, incessant political indecisions and decisions that leave a whole number of people impoverished. He believed if we had more females educated, they will use their emotional power to restore some sanity into the world’s body politic. He reiterated Dr.Aggrey’s statement that “if you educate a woman, you educate the whole nation.”

He touched on the issue that has left a considerable number of women in the world confused; hijab. And to reassure that the Hijab is not any form of enslavement but the wavelength of civility, he recounted the study conducted by Hollywood where famous beautiful models, Naomi Campbell and Christie Brinkley were made to wear Hijab and use the notoriously famous 125th Harlem street that has the most notorious of the world’s hoodlums. The hoodlums distance themselves away from the two ladies saying “salaam alayk, salaam alayk.” They were made to wear the skimpy, winky, short and sexy clothes and use the same route. The hoodlums behaved as if to almost “eat them up”. The Hijab was then established “as a protective layer.” He therefore stated that “a beautiful woman in Hijab is an angel walking on earth.”

A politician will never end an interaction with a crowd without politicking. In a like vein, the great scholar of comparative religion touched a little bit about his activities in that honored aspect of knowledge. He touched on the places he had been to debate Hinduists, Christians and a whole lot of people. How he met Mike Tyson in prison. And how they were able to expose the lies, sophistry and fallacious claims by an author who wrote the book “ The Bloody Islam.” He took us through the processes they had go through to revise the notes of the many people who believed in the incorrect claims by the author on Hajj. And he stated that they used verses from the same Bible the author uses to refute his claim and set thing aright.

The lecture which was highly patronized ended very late in the night when he took us through how he met his first ever wife and the need for us to educate ourselves, prioritize and plan.

As usual, I asked which book enthralled him the most. He responded that he read everything. “ I know Hinduism more than I know Islam.” A great Muslim. He ended “ the ultimate book I read is the Quran.”