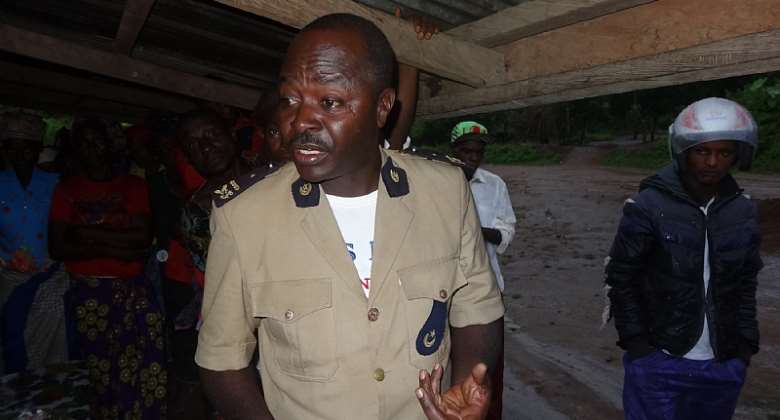 Gayama One, Fungom Subdivision, North West Cameroons: Mr. Patrick Lienwotue, Divisional Officer (D.O) of Fungom Subdivision, Menchum Division paid a contact visit to Gayama on 7 August 2017, where he announced that Cameroon government is doing everything to ensure that all affected persons by the water from the Kashimbila Multipurpose Dam would be compensated.

He spoke after visiting the former Gayama 2 village which has been completely wiped out by the water from the Kashimbila Multipurpose Dam constructed by the government of the Federal Republic of Nigeria.

The dam has since destroyed homes, crops, UNESCO world heritage sites and causing a lot of misery in the communities of Gayama, Ezong, Akum Upack and Kpep on the Cameroon side.

The adverse effects of the dam are already being felt in the whole region presently witnessing prolonged sunshine during a supposedly rainy August.

D.O. Patrick Lienwontue is the first senior authority from the Cameroons to visit the affected communities under his administrative jurisdiction since the dam waters rose to its maximum 192 meters above sea level in May 2017.

He told the communities of Gayama, Munka and Munkep in Fungom subdivision that the government of Cameroon has not abandoned them.

Responding to worries addressed by the communities concerning land crisis, destruction by cattle during transhumance, illegal logging by some Nigerians in complicity with some local authorities, he reassured the people that government was up to the task and would not fail to defend the territory.

Chief Tem Eric complained about the attitude of the Munka people who trespass on Esu land and collect revenue from farmers there. He also complained about Eshimbi people who cross from a different subdivision in Menchum Division to occupy and develop land in Fungom Subdivision.

Fon Abang of Munka in his address to the D.O. on the Munka Palace grounds promptly responded to the issues raised by the Esu people of Gayama. “Munka is an independent minority group recognized as such since the arrival of the German colonizers and various intelligence reports of British administrators to Southern Cameroons. Munka has never paid taxes to Esu Fondom. Munka speaks a different language and its chief is not enthroned by the Fon of Esu.” The FON (chief in North West Cameroons) of Munka said.

D.O Lienwontue Patrick called on the populations of the area to prepare for the resumption of school on 4 September 2017. “Start cleaning around your school premises as a sign of your preparedness for school resumption.” He said.

He warned that following the disturbances throughout the North West and South West regions of the Cameroons with people calling for secession and federalism, only the Head of State could decide on the best outcomes with other political parties.

The D.O ended his first contact tours at Esu and Weh preaching the same message of respect for State authority, better hygiene and enjoining the communities to send their children back to school on 4 September 2017.