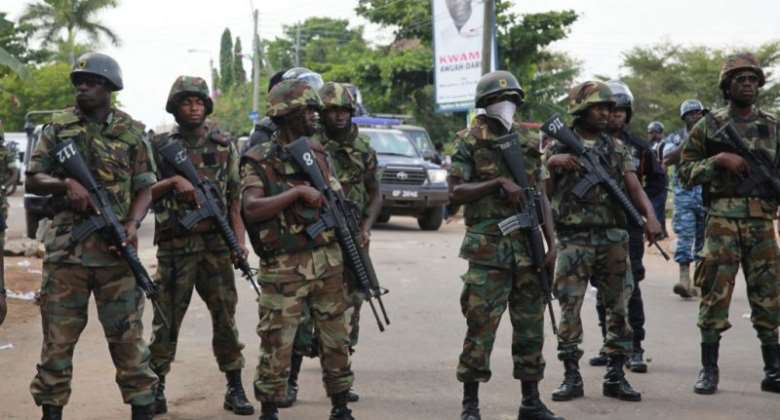 Those that have been reading my articles will by now realize that l have always found and positioned myself in the role that the police service plays in any functioning state. Also times again, l have appreciated and made echo of the fact that police service is the pinnacle, apex, beacon, axis and spokes of the wheel on which a country is run ( pardon the pun ) in contemporary times

I cannot tell with certainty the numerical strength of our police force. But if we should base our judgment on the 6:1000 police personnel to demographic ratio, there will be a gaping deficit with account to police force. In other words, Ghana doesn't have 162000 police officers to march its 27 millions of people as recommended by UNESCO. We may think of citizen vigilantism for auto-protection as our next option. Citizen vigilantism to protect our communities has its side effect. The death of Major Mahama and many other similar incidents are glaring fact that Ghanaians can't be entrusted with self-protection task

Since inception of first republic by Dr. Kwame Nkrumah, a plague of rampant and gratuitously arbitrary coup d' etats rocked Ghana. The hesitation to use the military as internal security structure was born out of that. The military is meant to defend the nation from external aggressions from un/known enemies. The military force being part of national security is used in times of extraordinary exigency. For example, earth quake or natural disasters as relief team

Then we have to accept the security reality in the country. The truth of the matter is security has broken down to its lowest minimum ever since ex-president Kufour took over from NDC of JJ Rawlings. And continued through Mills's, Mahama's and now Akufo-Addo's administration

My study of criminology reveals that a criminals do not want to shed spot on their accomplice/s not to talk about Themselves. In essence operating under the cover of darkness is strategy of criminals. The main reason they hide in the shadow. Nowadays in Ghana, there have been reported cases of armed robbery in a broad daylight. The recent one happened at Lapaz in the heart of the city. In that robbery attack two police officers were shot with glee. With one running while the other killed instantly. The police officer who ran for his dear life, managed from where he kept cover to arrest the robbers. Kudos to the police officer!!

But definitely, this incident is sneering, gibing and scoffing at us as a nation. And we, the good people of Ghana can't fold our arms and watch with nonchalant paroxysm or do-little media hype. Now going down the memory lane, Rawlings era was the opposite of the police state. He guaranteed the internal security largely using the military. By rightly targeting the armed robbers and giving them their deserved doses or shots. Needless to say Ghanaians felt safe under Rawlings's strategy of using the military to thump out armed robbers

The strategy worked largely because it was being coordinated by security wizkid or wizard Captain (rtd) Kojo Tsikata. I think this is the man whose advice on how to guarantee our security should be sought. Now, under constitutional rule our security reposes on the work of ministery of interior. And can't perceive any agitation on part of military personnel when put together with members of police service to guarantee our safety. In the so-called "juntos pero no revueltos"

Am firm believer and as attested by police IG, Mr. David Asante-Apeatu, that the notoriety of criminals or society miscreants currently is largely due to the fact the police force is under resourced. A starkly revelation which majority of Ghanaians identity with. Hence the ministry of interior has to do the yeomen's job of working together with the military to curb this pervasively prevailing high level of crimes. France is just a typical example where police and military work together efficiently in harmony to enforce national security

The channel we used was the same channel Joy FM used to get ...
38 minutes ago