Exclusive Breastfeeding And Its Importance 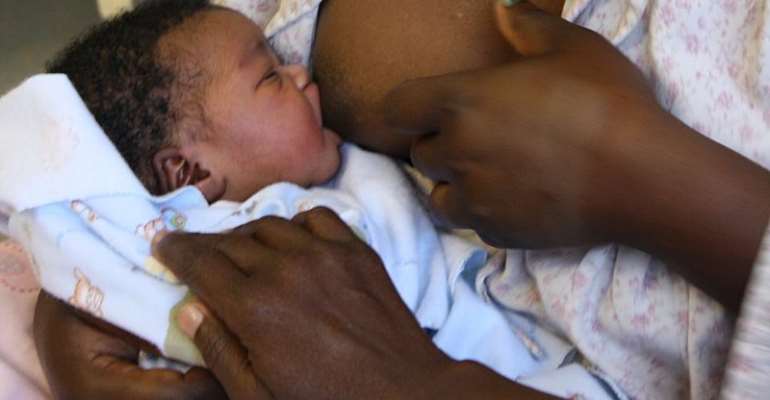 Madam Amoah Akolpoka confession about exclusive breastfeeding was so practical and interesting a story to share, to convince lactating mothers who are against the practice to have a second look at their unhealthy decision.

“As a result I gave water and food to my three children who gave me troubles, falling sick often. During their upbringing as babies, hardly did a week pass by without them being admitted at health facilities to be treated.

“But after joining the Club and being educated about the importance of exclusive breastfeeding and practicing it, I no longer go to the hospital frequently.

“My fourth baby looks healthier than my first three children when they were at the same age.”

Madam Akolpoka, mother of a five- month old baby from a village called Kulbia- Nayire in the Upper East Region, gave the narrative at a durbar dubbed: “Integrated Youth and Welfare” organised by UNICEF in the Kulbia- Nayire and the Gorogo Communities.

She however admitted that it was not easy for her when she begun the exclusive breastfeeding with her baby as the mother in-law would not allow her to do so.

According to her, the mother-in-law threatened her that her baby would die if she exclusively fed it on breast milk and also thwarted her efforts to exclusively breastfeed in many ways.

She said her mother-in-law was of the view that all the children she gave birth to were given water and even fed during their infant stages and wondered why she was practicing exclusive breastfeeding.

Madam Akolpoka said she had to run away from the husband’s house to the father’s abode to enable her to breastfeed her exclusive breastfeed her baby.

She said when she returned to her husband’s house and the mother-in-law saw the differences in the growth of the baby, she bought into the idea of the exclusive breastfeeding and allowed her to continue with the practice.

The situation of Madam Akolpoka is not an isolated case. Some negative cultural practices remain a major threat to the survival of infants and could even lead to mortalities.

Exclusive breastfeeding as defined by World Health Organization (WHO) and UNICEF is the practice whereby an infant receives only breast milk from the mother.

The two international organizations recommend that mothers should breastfeed their child exclusively for the first six months.

Exclusive breastfeeding, according to WHO, could save about 220,000 children every year globally when practiced by all mothers. It recommends that colostrum, the yellowish sticky breast milk that is produced at birth as the ideal food for newborns, to be given within the first hour of birth, a process referred to as early initiation.

Infants breast fed within the first hour of birth are three times more likely to survive than those who have their first breast milk after a day. It also states that exclusive breastfeeding is the most cost effective way for reducing childhood morbidity such as obesity, hypertension and gastroenteritis as well as mortality.

To prove beyond reasonable doubt that exclusive breastfeeding is very critical, the Healthy Newborn Network report also says that for infants to survive, grow and develop properly, they require the right proportion of nutrients.

According to the report breast milk is rich in nutrients and anti-bodies and contains the right quantities of fat, sugar, water and protein, which are major pre-requisite to the health and survival of the baby.

In an interview with the GNA , a Senior Midwife at the Bolgatanga Municipal Health Centre, Mrs Mary Azika, confirmed that when babies were exclusively breastfed, their immune system was strengthened, enabling them to stand life-threatening illnesses like pneumonia and diarrhoea among other infections.

“In fact, reports indicate that babies that are not exclusively breastfed for the first six months of life are 15 times more likely to die from pneumonia compared to newborns that are breastfed exclusively for six months after birth and that explains why it is very important for all mothers to be encouraged,” she said.

Maternity leave period is another factor which hinders exclusive breastfeeding.

Mrs Azika explained that under normal circumstances a mother was expected to exclusively breastfeed her baby for six months, but she is given only three months maternity leave.

Section 57 (1 & 3-5) of the Labour Act 2003 (Act 651), guarantees only 12 weeks, approximately three months of maternity leave to breastfeeding mothers, however a breastfeeding mother may be lucky to receive additional 14 days provided that such a fellow underwent caesarean delivery during childbirth.This is contrary to the effective health promotion messages that advocate six months exclusive breastfeeding.

She condemned the practice where employers disallowed breastfeeding mothers to carry their babies to the work place after the three months maternity leave expired.

This, she noted, often compelled most mothers to either break the protocol of exclusive breastfeeding for the six months period and resort to other feeding formulas or even express their breast milk for caretakers to feed their babies when they left for work.

She indicated that the expressed milk from the mother meant to feed the baby could be contaminated and so should be avoided.

She mentioned instances where some mothers–in-law had disallowed mothers to exclusively breastfeed their babies as another major challenge confronting the practice of exclusive breastfeeding.

Additionally, studies have shown that some of the major factors that inhibit exclusive breastfeeding include sore nipples of mothers, mother’s perceptions of producing inadequate milk and societal barriers such as employment, inadequate breastfeeding knowledge, the lack of family and societal support and the lack of guidance and encouragement from health care professionals.

According to health experts, sore nipples can be prevented by teaching mothers proper techniques on the initiation of breastfeeding. To prevent sores on the nipples, health experts recommend that the breast should be allowed to air-dry for some minutes after feeding and nursing pads should be changed regularly to prevent milk flow. Other precautions include expressing breast milk if the breasts are engorged and avoiding use of soap, alcohol and extra water on the breast.

It has also been established that advertisement of infant formulas could persuade mothers to opt for the use of pacifiers and bottle feeding instead of practicing exclusive breastfeeding.

However it is very important for mothers to be very careful in patronising these advertised infant formulas found in the market since they are designed to meet the nutritional needs of infants with a variety of dietary needs.

For instance, the problem associated with bottle feeding involves high risk of exposing the child to pathogens owing to unhygienic practices during handling and preparation of infant formula.

Governments, civil society organisations, the media, traditional and religious leaders, family members and community health workers all have a role to play in the survival of newborns through the uptake of exclusive breast feeding.

Indeed in this way we would all be seen contributing to prevent many infant deaths and thus contributing to the attainment of the Sustainable Development Goals, which prioritises maternal and infant mortality issues.

There is also the urgent need to replicate the Model Mothers Club concept adopted by the Integrated Youth Needs and Welfare in promoting exclusive breastfeeding in deprived and far-to-reach areas in the Upper East Region.

The NGO with support from UNICEF had facilitated the formation of the Model Mother Clubs in 80 communities, 40 each in the Bolgatanga Municipality and Talensi District.

These Model Mothers have been trained by health personnel with the support of the NGO to promote exclusive breastfeeding in their communities.

The project dubbed: “Facilitation of Communication for Development (C4D) Activities in Communities to Promote Behaviour Change,” which begun in 2016 is making significant impact on exclusive breastfeeding as many mothers are now adopting the practice.The Model Mother Clubs are actively engaged in championing and promoting exclusive breastfeeding among young lactating mothers.

Among the roles of the Model Mothers include regular meetings with young mothers and educating them to exclusively breastfeed their babies.

They are also expected to encourage pregnant women to go for regular ante-natal and postnatal health services and to also deliver at health facilities and not by unqualified persons at home.

Beyond this, the NGO through the Communication for Development model, allows community members to lead the development process instead of external actors.

The NGO is using drama, traditional music and local video shows to promote the basket of behaviours including, preventing child marriage, open defecation and promoting best practices such as hand washing with soap under running water, using simple and easy to construct hand washing devices such as the tippy taps, ‘issah wash containers’ among others.

Government must review the maternity leave from the current three months upwards to six months, men as heads of family who lead in the decision making process have a very vital role in promoting exclusive breastfeeding.

Men could do this by insisting that their wives exclusively breastfed their new-born babies instead of being forced by their mothers–in-law not to practice exclusive breastfeeding.

NGOs, traditional and religious leaders and the media must join forces with the Ghana Health Service to promote exclusive breastfeeding particularly at rural communities where most mothers are disallowed from practicing the concept.