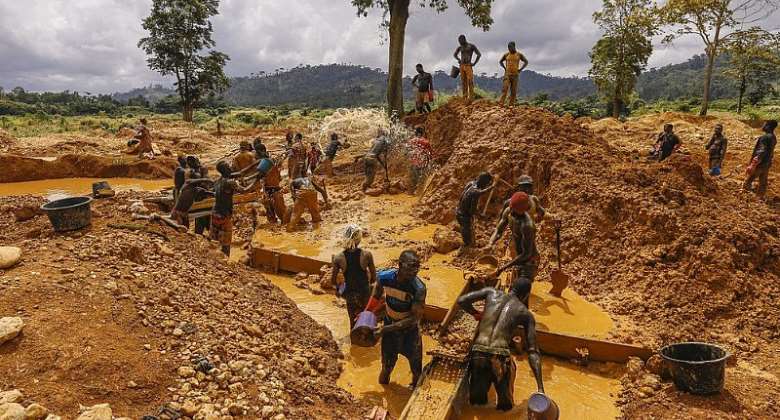 The assertion by Nana Addo Dankwa Akufo-Addo that the Delta Force problem is “under control” in Kumasi is one of the ways we have persistently attempted to resolve national issues, irrespective of political party and leadership, leaving the issues to fester on to assume a life of their own (News about Akufo-Addo’s claim here: http://www.ghanaweb.com/GhanaHomePage/NewsArchive/Kumasi-troubles-under-control-Akufo-Addo-527640). Bringing the Delta Force “uprising” in Kumasi under control is yet another demonstration of the halfhearted attempt at resolving a national crisis that requires the commitment of political leadership to uproot the menace once and for all.

In this piece, I argue that there is a triumvirate relationship between political vigilantism, galamseyism, and the land guard syndrome. Thus, the attempt to portray the temporary cessation of the Delta Force mayhem in Kumasi as having brought the lawlessness that has engulfed Ghana under control is a demonstration of poor political leadership which the president will own as a legacy.

The triumvirate relationship between these three evils is undeniable. While elections tend to be seasonal, galamsey activities and the land guard syndrome are two evils Ghanaians have to put up with on daily basis. Together, the three have become the new normal in Ghana. In 1997, I bought my first piece of land at Ablekuma, a suburb of Accra. On the instigations of the middleman, I put up a “chamber and hall” on this piece of land only for land guards to pull it down and left threatening inscriptions on part of the wall that was left standing. It was around the time Owusu Sekyere (alias Kweku Ninja) and his pal, Jerry Wornu (alias Taller), were murdered in cold blood by suspected land guards.

After the murder of those two individuals, the issue of land guard took center stage but not for the right reasons. The short sighted reason the issue took center stage was how to locate the killers of Kweku Ninja and Taller and to also locate the cadaver of the two. While one would have expected the police service in collaboration with military to design a comprehensive strategy to deal with the menace of the land guard syndrome, soon after locating the cadaver of the two, we all went to sleep, waiting for the next killing that would create another sensation to tickle our hyperactive emotions.

Since the killing of Kweku Ninja and Taller, many private developers have been harassed, some maimed, and others killed for the simple reason that they dared to invest in a landed property in Ghana. In some of these cases, it is not difficult to trace the trouble to the doorsteps of some high-ups in the Ghanaian society.

The recent case involving Tony Lithur, John Dramani Mahama’s lawyer, and a senior police officer, Commissioner of Police Mr. J. Oppong-Boanuh is a typical example of the lawlessness in land administration that can be traced to the doorsteps of those in authority. While Lithur found it expedient to file a suit in a court of jurisprudence to restrain Oppong-Boanuh, the latter found it more convenient to deploy armed guards to protect what he claims to be rightfully his. As observable, the two are using their professional networks to pursue what each of them thinks rightfully belongs to him.

The question is: what about the ordinary citizen of the land who lacks these professional influences? Clearly, if the disagreement between either of the two and an ordinary citizen, it is obvious that they would have employed all kinds of methods, including the use of violence to frustrate that individual. This suggestion is not farfetched, based on the behavior of these prominent citizens of the land. If the senior police officer could not adhere to due process but employ armed guards to terrorize his opponent who had chosen to use the law, it only confirms the lawlessness and the impunity that has become the daily staple that is being visited on the ordinary Ghanaian day in day out.

I must be quick to point out that I cited this case because it is recent and active. I am aware of some Ministers of State and parliamentarians both in the current and the previous administrations who are deeply associated with some of these thugs who go around neighborhoods terrorizing private developers, maiming some and stealing from them, and even killing some of them. Have we not heard that some land guards have become members of parliament and/or ministers of state?

Political Vigilantism as seasonal
The question then is how do you deal with the current spate of lawlessness—political vigilantism and galamsey—without dealing with the land guard syndrome. First, it should be noted that political vigilantism is a seasonal phenomenon. In the life of Ghana’s 4th Republic, the phenomenon of political vigilantism picks up or peaks in an election year. As an election observer with the Coalition of Domestic Election Observers (CODEO) in 2000, I observed the activities of these groups from a very close vantage point and have been raising concerns over their activities ever since. In 2009, when the NDC took office, we are all aware of the widespread attacks by individuals belonging to some of these groups on state institutions for similar reasons Delta Force is in the news today.

Perhaps the effrontery with which Delta Force has carried out its raids, extending them to the national security apparatus and the courts is what has incensed every Ghanaian to begin to speak about the issue of vigilantism. But a closer look at this issue reveals a few patterns. Elections being seasonal, the activities of these vigilante groups fizzle with the elections. But the land guard syndrome and galamsey activities have always served as a huge reservoir for some of these individuals, if not most of them, to return to. Once the elections are over and the tensions associated with them begin to fizzle, these individuals, apart from those who are coopted into the security services by the winning party as the case has been, find their way back into galamsey and land guard activities. Others are on constant standby to be employed for a fee against perceived enemies or as a debt collectors.

Having followed the current debate on the issue of political vigilantism cum galamsey activities fervidly, I am of the view that the third component of the phenomenon, which is the land guard syndrome, has been left completely untouched. I have listened to representatives of some of our Ghanaian think tanks, for example IMANI and OccupyGhana; the Clergy, politicians, and people from all walks of life. It is heartwarming to hear “most” of these individuals, including people who belong to the staunchly opposed political persuasions in Ghana, the NPP and the NDC, for once, agree that political vigilantism and galamsey activities pose a great risk to the peace and security of Ghana.

The point is that members of political vigilante groups that are not fortunate to find their way into the security services would consider other means of livelihood similar to what they already know too well—the use of excessive force to perceived targets to comply with their illegal demands. In this regard, being a land guard is simply a naturally shift.

Thus, the eradication of this high level of insecurity and impunity from the Ghanaian society requires a holistic approach to dealing with the problem. The problem will not go away if we choose to deal with it along partisan lines. The problem will not go away if we do not consider the multifaceted aspects of it. There is an integrated approach to dealing with this issue. A holistic approach to these issues should include investigating even some of our ministers, parliamentarians, and individuals in uniform who aid some of these criminals. A stitch in time saves nine!