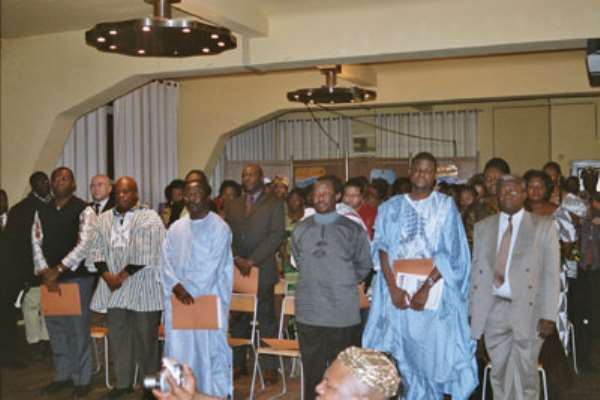 The Ghanaian Community in Belgium last Saturday March 5, 2005 had a taste of the wind of positive change chapter two now sweeping over our beloved country – Ghana – as they marked Ghana's 48th Independence Anniversary. The anniversary program was a collaborative effort between the National Federation of Ghanaians Resident in Belgium (GHANABA) and the Ghana Mission to Belgium and the EU. The program was opened with a welcoming address by the General Secretary for GHANABA, Mr. Kingsford Duah Boamah. Prayers for the Community and the motherland were said by Rev. Maxwell Brako of the Church of God.

The celebration activities included an informative part with a seminar and cultural display by the community associations. The President of the GHANABA, Mr. Kwaku Boamah Acheampong introduced the themes and speakers for the Seminar and chaired the function.

Leading the discussion, Dr. Godfried Donkor, the chairman of Asanteman Association Belgium, who spoke on the theme 'the Ghanaian democratic rule as an example for the other African countries and the role of the African Diaspora in Belgium', lauded the contribution of our traditional leaders – the chiefs, the media and civil societies in our present democratic dispensation. He also praised the independence of the Electoral Commission and the efforts put in for the successful elections in December 2004.

Dr. Donor stressed the need for the international community to assist the country in retrieving any stolen money that are banked overseas by politicians if there is any, promote fair trade and eliminate the dumping of foreign goods which have been stifling the good work of local manufacturers and also consider canceling all of Africa's debts.

On the role of the Diaspora, Dr Donkor encouraged Ghanaians in Belgium to increase their remittances and consider investing in the economic and social sector of the nation. He also challenged them to play an active role in policy debates.

Speaking on the second theme for the evening 'the impact and implications of the Economic Partnership Agreements (EPAs) between the EU and the African countries – the case of Ghana', Dr Paul Goodison, an expert on trade relations between EU and developing countries stressed on the need for fairness in the implementation of future trade between Ghana and the EU . He said Economic Partnership Agreement (EPA), as it is being put forward now, is essentially a free trade area agreement that involves the dismantling of import duty on substantially all trade between the ECOWAS over 10 to 12 years. It also involves the liberalization of services and the conclusion of agreements in trade related areas. This he said should be done with a development dimension.

The impact of EPA on Ghana however will depend on the type of EPA agreement Ghana negotiates taking into consideration the structure of its economy and trade with the EU. The aim of an EPA, according to the EU, is to transform West Africa into an economic hub which both attracts investment and mobilizes private initiative, a centre of economic activity ensuring sustained growth and a long lasting economic social and environmental development. Dr. Goodison cautioned that this must be realized without increasing poverty in Ghana.

Dr Goodson noted there are issues that Ghana should address to ensure that EPA impacts positively on the country. These include:

· what can Ghanaians themselves do to make sure they gain from future trade relations with the EU.

He referred to a case study done by Eurostep on the possible impacts of EPAs on some African countries including Ghana (http//www.twnafrica.org/atn/campaigns/stoepa2.htm).

The cultural touch to the event was portrayed by the presence of Ghanaian chiefs in their splendid kente outfits and gold jewellery, and also dance performances from the Ewe Bobobo Dance Ensemble and the Antwerp based Adowa Group. Live contemporary highlife music was provided by the Ghanaian Belgium based Mystic Vibes Band. Splendid Ghanaian dishes were served to the over 300 people who attended the program.

Among the dignitaries present were HE, the ambassador Mr. Kobbina Wudu and the staff of the Ghana Mission, staff members of FOS NGO, Prof. Dr. Kwesi Boon of the VUB/University of Ghana, Pastors of the various Ghanaian Churches in Belgium, Ghanaian students at the various |Belgium Universities, Mr. Youssef Ghandour- Benelux Manager (Afriqiya Airways) and Ghanaian Community leaders.

Sponsors for the program were the Ghana Mission, Afriqiya Airways, NGO FOS, Flemish Government and the Flemish Community Commission.