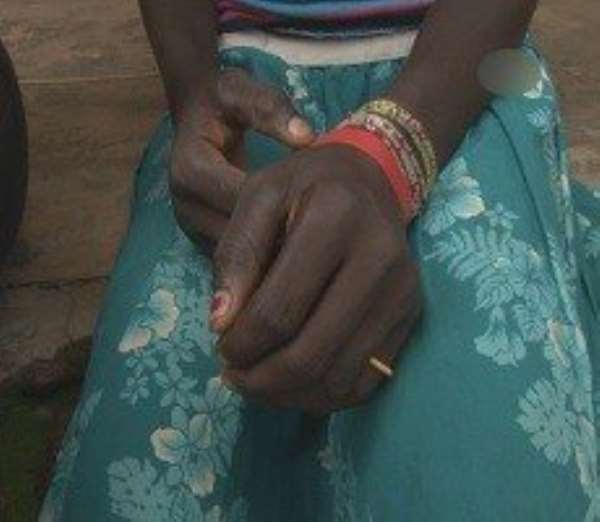 When 26-year-old Abigail Olori met Alhaja Latifat and her husband three years ago, she felt she had met an angel in human form who would turn the odds of her life for good.

Considering the fact that she had lost her parents and was saddled with the responsibility of catering for her siblings, she jumped at the offer to travel to Italy to work as an auxiliary nurse for the couple. Unknown to her, however, she was making the biggest mistake of her life.

A look into the eyes of the frail looking Abigail revealed misery, pains and betrayal that she has been subjected to in the last three years.

Coughing intermittently and straining herself to be audible, she narrated her ordeal in the hands of her traffickers. “I met Alhaja Latifat and her husband in 2013 when they came to Nigeria; then I was 23-years-old. I knew them via a relative of mine, Rofel, when I was residing in Bayelsa with my siblings. Rofel invited me to Lagos; it was during the visit to Lagos that I was introduced to Alhaja Latifat who promised to take me to Italy”, she stated.

“Before the journey, they said they wanted me to become an auxiliary nurse for them in Italy but unfortunately I found myself in Libya. They took me via the desert. We were about 30 that were taken to Libya from Nigeria.

Abigail
“Since I didn’t have parents, I was only able to raise N10, 000 which the alhaja claimed was for the passport she procured for me. The agreement was that I will work and pay her N2.4 million once I get to Italy which included the amount she spent to take me abroad and the return on her investment.

“Before we left Nigeria, they took us to a native doctor called Ewe in Abeokuta, Ogun State where we were made to swear an oath. It was after the oath that we were taken to Libya instead of Italy.

“Initially when I got to Libya and found out that my responsibility was to abort pregnancies for young girls, I refused but Alhaja Latifat and her husband locked me up in a room and beat me severely with a mop stick I had no option but to bulge. Each time I refused to perform abortion for any of the girls, they will lock me up and beat me.

“That was how I started assisting them to terminate unwanted pregnancies for the young girls who were working as call girls for Alhaja Latifat.

“We had girls within the ages of 10-15 working as call girls, sleeping with all sorts of men unprotected. Most of the girls were forced to sleep with elderly men as old as 60 years-old. Some of these girls confessed to me that they were hairdressing apprentices and fashion designers before they were deceived to come to Libya to work as prostitutes. “Any of the girls who refused to work, they will beat her up. Some of the girls who attempted to escape got into more trouble as they were resold to other traffickers in Libya.

“My main responsibility was to carry out abortion for the girls forced into prostitution. By my calculation, I would have aborted 320 pregnancies in the process. They built instrument which I used to perform the abortion on the girls. If a pregnancy was about a month, and the girl in question notified Alhaja Latifat about the development, the Alhaja Alhaja will not allow me to abort the baby till the pregnancy was about four or five months old.

“Apart from carrying out abortions, I also performed the job of a physician to the girls.

“They had about three houses which were used as brothels to house the girls who worked as call girls. I resided in one of the brothels called New York. The second was called White House. I can’t remember the name of the third one.

“I worked for the alhaja for about three years and I was able to raise the amount from the abortion I was performing on the girls and the money I got from my male friends who were into armed robbery in Libya. Like the call girls, I was not allowed to operate a bank account. Since I didn’t operate any bank account, the money I earned was kept with Alhaja Latifat. Within two years I was able to pay the N2.4m agreed amount on the contract and also give her N1.5M which I kept with her as my personal savings.

“Meanwhile, trouble started after I demanded that she gives me back my N1.5m which was with her as I wanted to return to Nigeria. Immediately after I demanded for my money, this strange sickness started. I began to grow thin and lose weight. And then skin rashes began to appear all over my body. Look at me I am now a shadow of myself. I don’t know what is wrong with me. I feel very weak too.

“I was rescued alongside two other girls weeks after Basirat and Omobolanle were rescued through an NGO, Alliance for Rights Defender, owned by human activists and lawyer, Mr. Ojay Akinwale. Mr Akinwale has been the one working with operatives of the National Agency for the Prohibition of Trafficking in Persons (NAPTIP). Since I was rescued and brought back to Nigeria, Alliance for Rights Defender has been instrumental to providing medical care for me. I want to get well first and I also want the Federal Government to investigate Alhaja Latifat, her husband and others running this human trafficking as a family business by taking advantage of young girls from indigent families”.