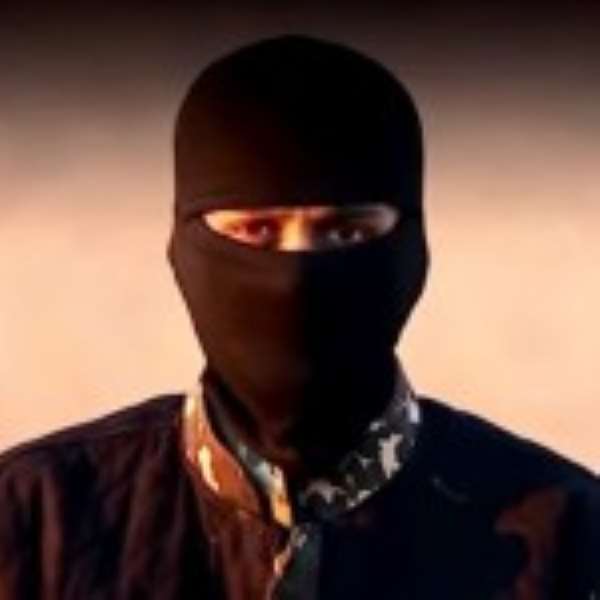 A video by so-called Islamic State (IS) featuring a man and young boy with British accents is “desperate stuff”, Prime Minister David Cameron has said.

The film, which purports to show the killing of five men who IS says were spying for the UK, is from a group that is “losing territory” and “increasingly losing anybody’s sympathy”, he said.

The UK’s intelligence agencies are examining the footage.

Voice-print analysis will be carried out to try to identify the masked man.

The man says the 10-minute video – which has not been independently verified – is a message for David Cameron, and he threatens attacks in the UK.

On a visit to east London, Mr Cameron said it was “desperate stuff” from a group that carried out “the most utterly despicable and ghastly acts”.

“But this is an organisation that’s losing territory, it’s losing ground, it’s, I think, increasingly losing anybody’s sympathy,” he said.

He said IS hated the UK for being a “successful, tolerant, democratic, multi-faith, multi-ethnic nation”, but added that Britain would “never be cowed”. ‘Break borders’

In the video, the masked man who has a British accent and is holding a gun, mocks Mr Cameron for daring to “challenge the might” of the extremist group.

He goes on to say: “We will continue to wage jihad, break borders and one day invade your land where we will rule by the Sharia.”

The five men, wearing jumpsuits and kneeling in a desert location, then appear to be shot in the back of the head, after making what is claimed to be their confessions.

One of the men says he had been asked to provide information about the location of IS militants, including two Britons, apparently to help target them with air strikes.

A member of a Raqqa-based group which opposes IS, Abu al-Furat, told the BBC the victims included shopkeepers and businessmen from the town, and he doubted any of them were spying for Britain.

IS claimed that one of them had been using his internet cafe for spying purposes, he said.

“I know personally two of them, who started demonstrating very early,” he said. “They are the sons of the Syrian revolution in Raqqa.”

After the apparent killings the young boy, who seems to be aged about six or seven years old and is wearing military-style clothing, is seen pointing into the distance and talking about killing “unbelievers”. ‘Jihadi John’

Mohammed Emwazi, the Briton who became known as Jihadi John, appeared in the videos. The US said he was killed in a drone strike it carried out in Syria in November.

ntelligence officials are using voice-print analysis to see if the voice of the man in the new video matches that of any individuals known to have travelled to Syria and Iraq.

BBC security correspondent Frank Gardner said the actions of the man in the latest video would “probably be a fairly short-lived attempt… to take on the mantle of Mohammed Emwazi”.

It showed IS was “absolutely paranoid” about informants and “looking over their shoulders, wondering where the next drone strike is coming from”, he said. ‘IS brand’

But Shiraz Maher, senior research fellow at the International Centre for the Study of Radicalisation at Kings College London, said the group remained “very powerful”.

Jonathan Russell, head of policy at the counter-extremist think tank, the Quilliam Foundation, said it was “shocking” to hear British voices and to see a child in the video, but that both were being used “to reinforce the IS brand”.

At least 700 people from the UK have travelled to support or fight for jihadist organisations in Syria and Iraq, British police say. About half have since returned to Britain.

The IS group , notorious for its brutality, seized large swathes of territory in Syria and Iraq in 2014, when it formally declared the establishment of a “caliphate” – a state governed in accordance with Islamic law, or Sharia, by God’s deputy on Earth, or caliph.