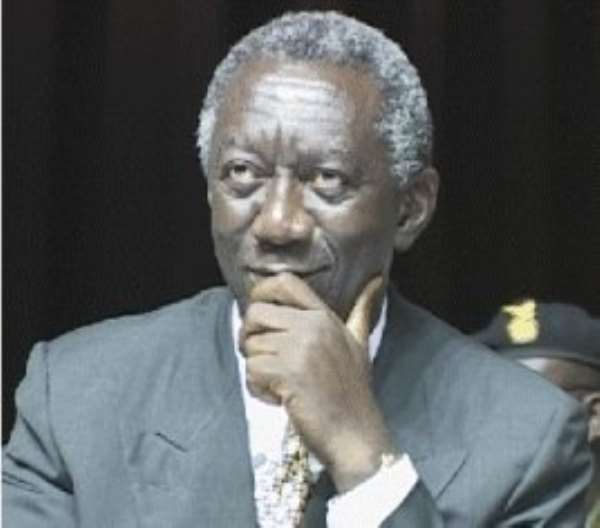 GDP Up From 3.7% to 5.1% Accra, Oct.13, GNA - Ghana's per capita income is now 450 dollars, having hovered between 300 dollars and 400 dollars for more than a decade, President John Agyekum Kufuor said in Accra on Wednesday. He said the Gross Domestic Product (GDP) had also increased from 3.7 per cent to 5.1 per cent currently. President Kufuor announced this when addressing the 44th Annual General Meeting of the Ghana Employers' Association (GEA). The theme for the meeting was: "Human Capital Development As A Strategy for Wealth Creation". He said: "We are not satisfied with the growth. Our aim is to achieve eight per cent GDP growth to lift the country to per capita income of 1,000 dollars. We are getting convinced that we can achieve it". President Kufuor said the Association was recognised as the best institution to partner the Government to unleash the wealth in the country and achieve its Golden Age of Business objective, adding; "we must work together as a team". He said human labour was critical in the generation of wealth, therefore, efforts must be made to improve on the human capital in the country to accelerate the pace of development akin to most of the countries in the Far East that were now developed but not more endowed with human and material resources than Ghana. President Kufuor said Ghanaians had the managerial and entrepreneurial skills to develop but labour needed to be trained because it had the ability to frustrate the managerial capabilities. "Not until we developed a common vision for management and labour efforts to develop would move in different directions". He stressed the need to develop the human factor saying the main underpinning factor was good governance, where the Government provided incentives to the investor, management and labour to work to create a congenial atmosphere to operate, with all of them enjoying the results of their good performance. "It is only when all stakeholders appreciate that it is in their collective interest to know the market and play their part collectively that we can survive with dignity in the global market. To envisage the development ahead, the Government resolved to take the country to the establishment of the Golden Age of Business", he said. President Kufuor announced that under the new educational reforms to be introduced soon for the next 10 years, the State would partner the private sector to assist with the implementation of compulsory one-year apprenticeship for Junior Secondary School leavers before they entered the Higher Senior Secondary School to pursue their various careers. He pledged the Government's determination to partner the Employers and Labour to put the country on the path to human capital development for its socio-economic development. Dr Charles Mensa, Vice President of the GEA, welcoming President Kufuor said "you can count on employers to work with you to make your tenure of office successful".