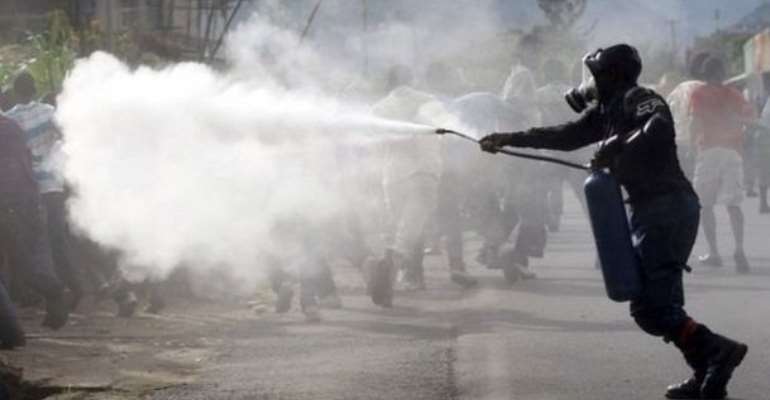 The extent and intensity of the police brutality unleashed on armed-less and peaceful demonstrators is reprehensible, unacceptable and must be condemned by all peace- loving Ghanaians. The demonstrators were simply exercising their constitutional and democratic rights to freely express their views on an important national issue such as the need for a new voters’ register. And for the Ghana Police Service to resort to the use of such extreme, disproportionate and unreasonable force raises questions about the motive and intent of their action.

The action of the Police to say the least was unprovoked, needless and irresponsible. Unprovoked because the demonstrators did not attack the Police neither were they bearing/carrying any offensive weapons to warrant the action of the Police. Moreover, the action was needless and irresponsible in view of the fact by their training the Police were in a position and indeed expected to employ more sophisticated methods in dealing with the situation rather than such outmoded and byzantine tactics.

What ACGIE finds shameful and disgusting is the revelation that when some of the demonstrators including members of Parliament tried to seek Police protection they were immediately turned away and told that the police were not there to protect them. Perhaps, the Police need to be reminded that their first duty is the protection of the lives of ALL GHANAIANS and not the interest of a particular government. It is a constitutionally mandated duty of the Police to protect every Ghanaian at all times. The failure on the part of the Police to leave up to this basic duty for some unexplained reasons is an indictment of the Police Administration. This, clearly, is a dereliction of duty for which the IGP and the Police Administration must provide some answers.

It is rather unfortunate and unacceptable that nearly three decades of constitutional rule, the Police per their action last Wednesday are attempting to reverse the gains made under the new political dispensation. Indeed, the vicious Police atrocities and mayhem of last Wednesday will go down in the history of our Fourth Republic as Ghana’s Day of Shame. It brings back bitter memories of the PNDC era where the rights of Ghanaians could be violated with impunity and the perpetrators of such heinous crimes were not held accountable for their misdeeds.

ACGIE would want to caution the Ghana Police Service that the era of acting with impunity and getting away is long gone and consigned to the annals of history. Ghanaians would hold them accountable for the atrocities of September 16 no matter how long it takes. It is important to remind ourselves that criminal acts such as those perpetrated by the Ghana Police on that fateful day against innocent civilians have no statutes of limitation. Against this backdrop, we call on the IGP to render an unconditional apology to the good people of Ghana for the shame and international embarrassment his men have caused Ghana and Ghanaians and also as means of saving the already-damaged image of the Ghana Police Service.

Finally, ACGIE calls on Parliament to set up a bi-partisan committee of Inquiry to investigate the circumstances that led to the unwarranted use of excessive and brute force by the Ghana Police Service on peaceful demonstrators. This, we are convinced, will send a signal to the Police that Ghanaians will not allow anybody to turn our beloved country into a Police State. The action of the Police last Wednesday must be condemned and resisted because it amounts to state-sponsored terrorism and thus, unacceptable.