A Partisan Police Service; A Threat To Democracy 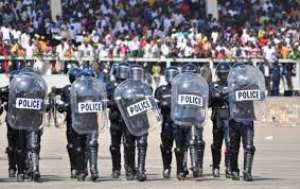 On the 16 th of September, 2016, a group called Let My Vote Count Alliance (LMVCA) organised what was expected to be a peaceful demonstration to draw the attention of the Electoral Commission of Ghana and the International community on the need for Ghana to have a new Voters’ register.

This comes in the wake of disclosure by the New Patriotic Party that there were persons who were in both the voters’ register of Togo and Ghana.

The anticipated peaceful demonstration was to ensure that a New Register is compiled by the EC of Ghana to ensure that only Ghanaians could register to vote for a Ghanaian President.

There were some issues initially but the green light was given for the demonstration to go on.

Some of the demonstrators sustained various degrees of injuries. Some took to their heels to get safety but were still chased and beaten to up. The conduct of the Ghana Police Service was so shameful and disgraceful, to say the least.

It was a sad day for Ghana that peace officers in uniforms paid for by the tax payer should use the same equipments to maim and visit untold and unprovoked beating of unarmed persons. What did the demonstrators destroy during the cause of the demonstration to have irritated the police?

Was physically assaulting the very peaceful demonstrators the only professional policing they could do? It is sad that non violent demonstrators were treated dastardly this way. The Ghana Police Service must be a police service for all Ghanaians. The police service must avoid partisanship in their operations. They must be told that a partisan police is a recipe for violence and instability and also a threat to our fledgling democracy.

The police must be condemned thoroughly for behaving unethically on a day they were expected to show maturity and professionalism. We have gone past the dark days in Ghana where innocent Ghanaians were stripped naked and paraded through the streets of Ghana. No amount of beatings and intimidations can ever stop decent and peaceful Ghanaians from expressing themselves through constitutionally mandated demonstrations. Local and International organisations working in the area of enhancing democracy must condemn the barbaric behaviour of the Ghana Police service.

President John Mahama who swore an oath to protect and defend the constitution and people of Ghana must reprimand the Inspector General of Police and his trigger happy attackers. There is nothing democratic about violence and beating up of innocent Ghanaians. The President must show leadership by upholding the oath he swore.