The Tattletale Of The Chimpanzee And The Drum 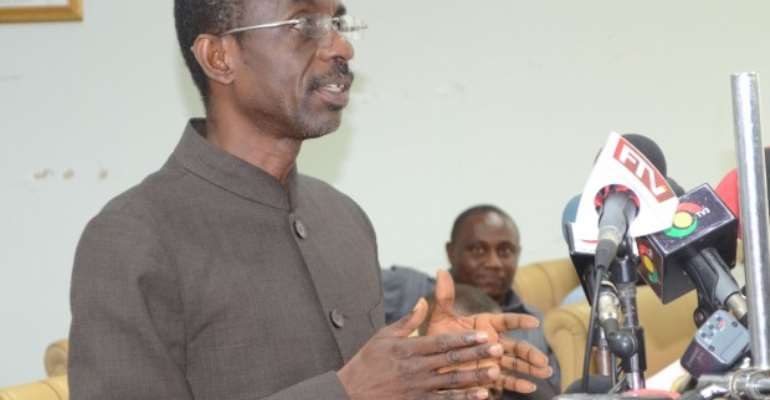 The story is told that one day all animals in the animal kingdom had a meeting.  The agenda was how they could entertain themselves during their leisure hours after the day's hard work.  The convener of the meeting was the elephant.  During the deliberation, the hare suggested that they should go into the forest and carve a drum so that anytime they felt like entertaining themselves they could beat the drum, sing and dance.  The suggestion was unanimously agreed upon.

On the appointed day, all the animals assembled in the forest and selected a very big Odum tree which they fell and cut to carve the drum.  They worked on the drum till dusk and after it had been carved, the tiger suggested that the ugliest among them will be the one to carry the newly carved drum home.  Before the ugliest among them could be chosen, the chimpanzee stood up, looking visibly angry and shouted:  'As for me I will not carry any drum'.  Then the elephant, the convener of the meeting replied:  'Has anyone asked you to carry the drum?  If you think you are the ugliest among us then you will be the one who will carry the drum whether you like it or not'.  At the end of the day, it was the chimpanzee who carried the drum home.

Asiedu Nketia and the NDC are acting like the chimpanzee.  Dr. Mahamudu Bawumia and his experts had made a research and came out with a thought - provoking revelation about the voters register. They did only 10% of the research and decided to present the results to the EC since time is running out if it became necessary to compile a new voters register.  Dr. Bawumia and his able team did not give a copy of their findings to any political party since the issue concerns only the EC which is an independent body charged with the sole responsibility of compiling the voters register.  Barely three days after the presentation of the findings to the EC followed by a press conference to inform Ghanaians of what they had found, Asiedu Nketia jumped on his feet, organized a press conference to tell Ghanaians that what Bawumia and his team presented was not true and that they were being tribalistic.

The funny aspect of the noise made by Asiedu Nketia was that Dr. Bawumia, in his presentation of the findings did not say the over seventy six thousand Togolese persons whose names were found in the voters register of the EC of Ghana voted for the NDC.  What Asiedu Nketia did, implies that indeed, these Togolese were brought in to vote for the NDC.  The multi-million Ghana Cedi question is: Why is it that the Convention Peoples Party, the Peoples National Congress, the Progressive Peoples Party, the National Democratic Party etc are not challenging the validity of Dr. Bawumia's finding but only the NDC is kicking like a mad bull against the finding.  No wonder the sages say when you mention dry bones, the old lady shivers.

The National Peace Council has come out to tell Ghanaians that the issues Dr. Bawumia raised need to be looked into seriously because in all situations in Africa where there was a dispute over voters register, the end result was war, chaos, mayhem and unnecessary bloodshed.  President John Mahama should be the first person to join the fray and support the National Peace Council's call for a thorough investigation.  As ECOWAS chairman when he went to Togo and the opposition parties there complained of a bloated register, he impressed upon Faure Gnasingbe, the president of Togo to see to it that a new voters register was compiled and it was done.  Even in that case Faure Gnasinbge still won the election.  What are Asiedu Nketia and his cohorts afraid of?  If a new voters register was to be opened is it going to be the case that only members of the NPP will be allowed to register?

Ghanaians should be wary of this man called Asiedu Nketia and president Mahama.  Asiedu Nketia has all his children and wife domiciled in Canada and enjoying whatever booty he gets and transfers to them.  In case of any war in Ghana, he can simply jump on board a plane and fly to Canada to enjoy life.  Similarly the presidential jet is at the disposal of Mr. Mahama and so if there should be war in Ghana all what he will do is to instruct his pilot to fuel the jet and get ready for a take off to any country of his choice.  In case the Presidential Jet is faulty, his brother's private jet is ready to carry him and his family to safety.  He has another option of running away in his luxurious V8 cars to the nearest country like the way Blaise Compaore did when the kitchen became too hot in Burkina Faso.

Since we metamorphosed from the revolutionary days to the current democratic dispensation, the NDC had always kicked against any election reform proposed by the NPP but thankfully they woefully fail since majority of Ghanaians throw their weights behind the NPP as far as election reforms are concerned.  In the first place, they strongly kicked against the use of transparent ballot boxes instead of the dark wooden ballot boxes which were used in the 1992 general election.  They said the government then had no cash to buy the transparent ballot boxes but thankfully the Canadian government donated the transparent ballot boxes which were used in the 1996 general election.  When the NPP mooted the idea that the EC should discard the use of thumb-printed voter identity cards and replace them with pictures of voters on the cards, the NDC sneezed and again kicked against the idea.  Eventually, the EC succumbed to pressure from civil society and replaced the thump-printed voter ID cards.

It was the same Asiedu Nketia who told Ghanaians that because majority of Ghanaian voters were illiterates, the NPP's call for a biometric and verification machine for the 2012 general election was not feasible.  Again the good people of Ghana supported the NPP which led to the EC introducing biometric and verification machines for the 2012 general election.  In fact, I was not surprised when he called a press conference to bastardize Dr. Bawumia's research and called on Ghanaians to disregard what Bawumia said.  The guy has no shame in his dictionary as he continues to be a vexation to the spirit of the good people of this country.  He always tries to play smart while not being clever enough.  Much as it is very easy for any political party in Togo to lay hands on voters register in Ghana, it is equally easy for any Ghanaian political party to get same from Togo.  After all, when voters registers in both countries are compiled, copies are given to all political parties.  If Asiedu Nketia is docile, Bawumia is smart enough to approach any registered political party in Togo to get their voters register. That is the difference between a Mamprugu whiz-kid and a half-baked Seikwa politician.

In the run-up to the Nigeria election, opposition parties in that country called for the compilation of a new voters register so that the election could be free and fair to avoid any disturbances that could lead to war.  Nobody from Goodluck Jonathan's party kicked against the idea because they had nothing to hide and it was done.  When General Buhari won the election, nothing happened and the good people of Africa's most populous nation are enjoying peace.  Countries like Togo, Malawi, Kenya, Liberia, Ivory Coast and Zambia compiled new voters register because they realized that the old ones they were using were bloated.

Those who were arguing that a new voters register will cost so much money should as well consider a situation where a loser and his supporters refuse to accept the result of the 2016 general election and take up arms.  In anyway, these people should be told that our elections are partly financed by some countries so it is absurd to argue along that line.  The NPP has served notice that the party will not petition the Supreme Court again in case it loses the 2016 general election.  That stands to reason that they will do everything possible to protect the ballot box and also make sure that anomalies in the voters register are corrected and if possible a new one is compiled.

During one of the IPAC meetings when the issue of the deletion of the names of people who used the NHIS cards to register cropped up, the EC made it abundantly clear that that will be very difficult to do.  Meanwhile, the Supreme Court had ruled that the use of the NHIS cards to register was illegal.  So if we allow the register to stand as it is today, don't you think we are promoting illegality?  And if we are promoting illegality don't you think we are inviting violence?  That is a riddle for you to solve, my dear cherished reader.