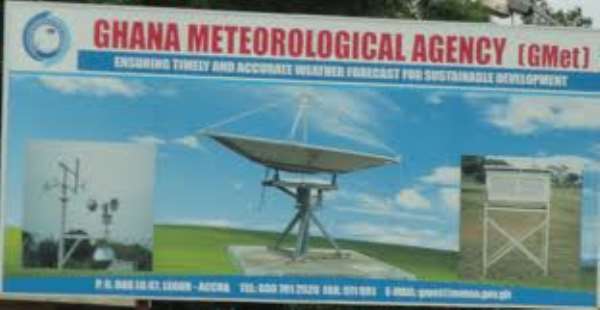 Accra, June 4, GNA - The Ghana Meteorological (GMA) Authority, on Thursday, warned of more rains as an observed thunderstorm is heading towards the country from Benin.

The GMA said the southern half of Ghana would continue to experience scattered thunderstorms and rain showers.

Mr. Michael Padi, a Senior Meteorologist at the GMA at the Kotoka International Airport, told the Ghana News Agency, in an interview.

He said the present weather determinants, meteorologically termed 'weather systems," generated a lot of moisture into the atmosphere, which equally resulted in rainfall.

The GMA explained that the rains would be more intense from now till the second week of June.

Group Captain Stephen Komla, the GMA Director-General, told reporters that the rainy trend would continue for the next two days and perhaps extend into the second week of June.

He said the rains would be more intense from now till the second week of June.

'It is expected that the Southern part of the country will definitely experience some more heavy rains,' he predicted.

Capt. Komla said the major rainy season of Ghana was between May and July followed by that of September to October, which was the minor rainy season.

The leadership included: National Chairmen - Mr Kofi Portuphy of the NDC, Mr Paul Afoko of the NPP, Alhaji Ahmed Ramandan of the PNC and Ms Samia Yaba Nkrumah of the CPP.

The leaders collectively called for a national effort to deal with the perennial flooding in Accra, and also pledged for a bi-partisan support to the government to take drastic measures to deal with the situation

The political leaders also called on President John Dramani Mahama to act immediately to deal with the causes of the floods especially properties in water ways.

A Ghana News Agency monitoring team observed that scores of companies along flood prone areas of Accra had also been submerged.

Along the Graphic Road, the GNA observed that Pepsi, Rana Motors, Toyota, Zenith Bank and Hassanco Enterprise were casualties.

Meanwhile, scores of Ghanaians have started thronging the Kwame Nkrumah Circle to catch a glimpse of the burnt GOIL Filling station that has claimed more than 90 people lives and destroyed infrastructure.

The GOIL fuel station, adjacent to the GCB Bank towers was gutted on Wednesday amidst heavy flooding in the area.

President John Dramani Mahama on Thursday said the Government had no option than to employ 'drastic' measures to staunch the perennial flooding of the country's capital city.

He said: 'We will have to take some measures to be able to avoid this happening in the future.'

'Often when these measures are drastic, you have a lot of sympathy and pressure not to take those measures, but I think that the time has come for us to remove houses out of water ways and the public should understand that it is necessary to save everybody else.'