Witches Camps in Northern Ghana-Reality or an Illusion? 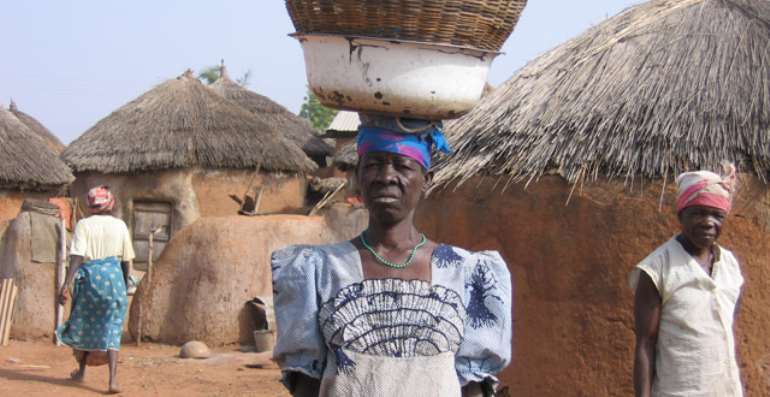 The issue of witchcraft has become hydra-headed in human history, and has recorded historical antecedence even from biblical times. The belief in witchcraft is strong throughout the country, and it is one of the commonest themes in most Ghanaian and by extension African movies.The new brand of "Kumawood" movies are notorious for such movies, ranging from "Kyeiwaa", "Efie Bayie" among others.

With the advent of science and technology and its concomitant antidotes to the problems of humanity, one is perhaps wondering why some people in the 21st century still ascribe sicknesses and other calamities to the doing of witches. The question that may linger in the minds of ratiocinative thinkers are how do the “witch doctors” determine who a witch is and what barometers are used to proof the guilt or innocence of these helpless souls and more importantly, why are only women branded witches? These are but few questions that are begging for answers.

These witches' camps are established as traditional shrines. They are truly intended to be sanctuaries and not prisons and are holding tanks of accused persons waiting to be saved for society. Most of the women are coerced to confess under compelling and dehumanizing circumstances. In some instances, they are made to drink concoctions prepared by the witch doctors.

The 'witches' camp' at Gambaga is, among others, situated in the East Mamprusi District of the Northern Region of Ghana. It is a place where women who are accused of witchcraft stay under the authority of the Gambaga chief, the Gambarrana.

Ironically, all the religious denominations have apparently reached consensus on the existence of witches on earth. At the Gambaga witches camp traditional rituals are performed by the chief to determine who qualifies to be a witch.

According to the people, most of the women in the camp were accused of witchcraft in their villages and then either brought by relatives or fled themselves to Gambaga,and once there, they are overseen by the chief, the Gambarrana, who is able to suppress their powers through ritual.

To determine whether a woman is a witch or not, the accused must come to the Gambarrana with the accuser and at least one man. A fowl is slaughtered and thrown in the air. If, when it lands and finishes struggling and lies on its side or stomach, the accused is perceived to be guilty. There are fees for the performance of this ritual. If 'convicted', the woman has her power neutralized with a further ritual that only remains effective close to the shrine where it was performed. The 'witch' is effectively confined to the local area and is forced to live communally in a camp.

But the mindboggling question is "Are only women that are witches? Local legends argue that men are equally guilty of witchcraft but are seen as influential and powerful in their communities and hence could not be forced out of their communities. However, women are vulnerable and do not have any power to influence society in most African communities.

Under the common understanding of witchcrafts in Northern Ghana, accused witches may be of any age. This is common in the Gambaga camp because it is believed that a witch could bequeath the witchcraft to her daughter or granddaughter .What about their sons or grandsons?

In terms of statistics, older women and people with various forms of disabilities are commonly accused of witchcraft, a situation which is highly unacceptable. Like many other witches camps, Gambaga camp is in a deplorable state and there are no any reliable sources of sustenance.

Science and psychologists seem to agree that some of these accusations of witchcraft can be out of depression fueled by menopause and other psychological disorders.

Interacting with inmates, one could sense that the inmates survive largely through benevolent organizations and philanthropists who visit the camp once a while.

Equally disgusting in the camp is the plight of the children of the alleged witches. Most of them are often not in school and the few who are attending school do not have anybody to sponsor their education after Junior High School leading to school drop-out.

Another issue of concern is about their right to vote during national elections. According to most women in Gambaga camp just like other witches camp, they are always denied their fair share of the national cake and for that matter they do not see why they should continue to vote without any assistance from government.

Addressing these abuses in our Ghanaian context has special significance only on paper. Ghana is seen as a leader in human rights on the continent, most notably for our Commission on Human Rights and Administrative Justice (CHRAJ), which extends access to justice where legal councils are few and the tradition of mediation is strong. As such, developments in the Ghanaian human rights law and practice have the potential to serve as model to other states. The persecution of persons accused of witchcraft in Ghana is mostly done by private actors with little government involvement or condoning of the practice.

Although there have been some achievements from the campaign for women's rights from the initiative of the Gambaga Outcast (GO) Home Project, little has been done beyond independent reporting to expose the situation of women and children living in the camp. Fostering awareness of witchcraft accusations and associated abuses, a distinct category of discrimination and violence is a first step in attending to this gender based inequality issue.

The Presbyterian Church of Ghana had been working since the early1960s to ameliorate the conditions of women living at the Gambaga camp. In 1994, the Presbyterian Church formed the Go Home Project to go beyond providing relief to rehabilitate and reintegrate women to their homes. The intervention is thought to have led to “the reduction of the inhuman treatment”, as well as drastically lowering the number in the Home. Evaluators of the Project found that the way women were brought to the home was humiliating, dehumanizing and brutal, and that if advocacy efforts were intensified, this could be reduced and stopped.

The main aim of the Go-Home Project was reintegration, but they also provided health care coverage for women and children in the camps, tuition and uniform fees coverage for camp children, and addressed human rights abuses through educational campaigns. Through the project, women were also interviewed as a sort of intake to the camp. A file was kept for each woman with information about her home village, trade, age, male children, and for some, release and follow-up information.

One may not be far from the truth to suggest that most cultural practices are unfavorable to women in northern Ghana as they continue to go through outmoded widowhood rites and do not have any right to inherit properties of their parents including land ownership. It is also disheartening to know that in the northern part of Ghana, women who are domineering and assertive are easily branded witches most especially when they are successful in their businesses.

Civil society groups must step up efforts to demystify the myth surrounding the age old concept of witchcraft which seems not to have any empirical basis.