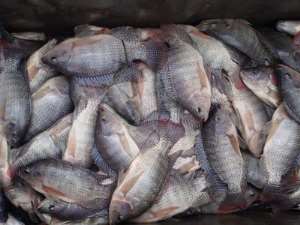 Have you ever eaten Tilapia, “Tipo” and other fish species from the Volta Lake? Do you know which section of the lake they were harvested or caught? And the method used to catch them? Would you have eaten any of these species if you were told they were caught with poisonous substance called DDT (dichlorodiphenyltrichloroethane) a colourless, crystalline, tasteless and almost odourlessorgano-chloride known for its insecticidal properties?

Information gathered by the New Crusading Guide Newspaper revels that such practices are ongoing along the Volta Lake from the north banks of the water to the southern belts.

The fishermen, in order to increase their harvest and to make ends meet for themselves and their families and also to survive the harsh economic conditions in the country indulge in such practices.

A visit to Yeji and other surrounding villages like Nkran-krom and some of the Islands on the Volta Lake by this reporter as part of the investigations revealed this unhealthy and life-threatening trend.

The Volta lake which spans about 14 (fourteen) miles toward s the northern parts of Ghana from Yeji in the Brong Ahafo Region has about 43 Islands strewn along it and filled with inhabitants who are mostly fishermen and their families.

These fishermen are migrants who have moved from the southern part of the country mostly, the Volta, Central, and Western Regions to engage in fishing to support and improve their livelihoods. Due to the inappreciable levels of growth and production of fingerlings in the Volta Lake, they (fishermen) have adopted two methods of fishing to sustain their livelihoods. These are the poisonous method of fishing and the Bamboo method of fishing.

Hon Kwame Emmanuel Opoku the Chief Executive of the Pru District Assembly with Yeji as its district capital explains in an interview with the journalist how the fishermen engage in these activities “it is true that they use DDT, bamboo and unapproved nets for fishing in this area. This has made fishing unattractive. Previously, fishing here was very attractive and encouraging. For some years now, the water level has been dwindling and the size has reduced”.

“Even the little ones are caught and thrown away”, the DCE disclosed.

With this happening the fishermen should have used good and approved practices to bring life to the fishing but that has not been the case.

He furthered that the negative fishing practices had been happening for a long. The situation called the attention of stakeholders including the district assembly and the traditional leaders to educate the fishermen about the dangers of fishing with poisonous chemicals to human health. Honourable Kwame Opoku disclosed that although the use of bamboo and DDT in fishing had been banned, the fishermen still do not see the need to put a final stop to it; “They still do it secretly”.

“What is happening here now is that fisheries department here wants to label all canoes so that they can check their activities on the water. It's so unfortunate that we don't have a data of all the fishermen. We are now working that out”.

At the bank of the Volta Lake at Nkrankrom , well known for large catch and whole sale of Volta fish, this reporter met four fishermen on the lake sitting on their canoe and repairing their torn nets. Sammy TettehWoyo is a native of Ningo in the Greater Accra Region migrated to Yeji in 1971 to engage in fishing.

35 year old Kwame Appiah, a native of Ekumfirim in the Central region was brought to Yeji by his father in 1983 to assist him do fishing.

Kwabena Mensah is a 48 years old fisherman who hails from Senya Bereku also in the Central Region. He has been fishing in Yeji for 15 years. Prior to fishing he tells this Paper he was a carpenter but had to stop because he was not getting any income from that. He claims fishing here has helped him generate income intermittently.

The fourth person NorteyZuta , is a native of Ningo in the Greater Accra region and a brother of Sammy Tetteh . All these fishermen work in a canoe called All Shall Pass. They tell me that they don't engage in poisoned fishing but claimed that the other fishermen who work on the lake at night use DDT and other poisonous chemicals to harvest the fish. According to them the continuous use of the chemicals has caused the fish level in the lake to reduce drastically.

“We keep experiencing low catch in the Volta Lake because the fishes are getting finished on the lake. Each and every night these unscrupulous fishermen poison the fishes in the water and when they get enough the leave the rest to rot in the water. They are wasting all these resources”, stated Sammy Tetteh. He continued that “these fishermen go out on the water in the night and disturb the water. Sometimes, they apply carbide, to bubble the water and then switch a high light which brings all the fishes in the dark close to it. They then go round the gathered fishes and apply the poisonous chemicals which kill them all in the process. They kill big and small, pregnant and singles ones”.

Kwame Appiah indicates that, “ yes we have seen them do it in the night but you cannot go close to them since some of them wield machetes and when you attempt to get close they will try to sink your canoe or kill you. Through this process they are able to catch large quantities of fish and sell them to the fishmongers and traders to be prepared for sale at the Kumasi and Accra markets. Another styles used by these unscrupulous fishermen in their line of work is hooking their small nets to the vegetation that have grown on the lake and apply the DDT. This kills each and every living thing within the area that the chemical has been applied.

Aside from the DDT application, these unscrupulous fishermen have another deadly method of fishing called Bamboo Fishing. This bamboo method requires fishermen to fix a sizeable number of bamboo sticks that have holes in them to an enclosed area in the lake. This is meant to catch the large and pregnant fishes. Since fishes are unable to swim backwards, when they enter into the holes they are unable to swim out and stay there till they are caught by these fishermen. One other thing observed by this journalist is the involvement of children (mostly boys) in these acts. Young boys between the ages of 8 and 15 years follow their parent to fish and they are taught all these methods of fishing sometimes they are made to go and fish by themselves and use their catch to feed their families. These children are found on the banks of the lake when school is in session. They are forced by their parents who are all fishermen to follow them to labour for themselves.

According to the Pru District Director of Education, more than 30% of children who are of school going age are out of school about 20 % are school drop outs.

Research we have conducted indicates that about 30% of children here who should be in school are not in school. They are forced by their parents to engage in fishing activities on the Volta Lake. Those engaged in fishing are trafficked from the northern parts of Ghana to Yeji, the district capital to do fishing. Most of these children have no parents. They have either been trafficked or abandoned by their parents or rented out to people to assist them in their line of duty. So most of them fend for themselves and they do fishing to survive. Interestingly the office of the district director of education is about two hundred meters from the bank of the lake where the children are engaged in the fishing activities.

The Pru District Director of Health, Dr Prince Quashie in an interview with this Journalist on 15th January 2015 said the Yeji hospital has been experiencing high rate of Cholera and diarrhea in recent years. These come alongside malaria, Pneumonia, Gynecological diseases and other non communicable diseases like hypertension and diabetes.

“We are also experiencing increasing rates of measles and meningitis. Sanitation over here is poor. If it were we wouldn't be experiencing cholera and other communicable diseases. This is not a matter of playing the blame game. All of us must be blamed for all that is happening here.

Back in Accra, the journalist went to the Fisheries commission of 24th January 2015 to interview the Chief Director at the commission on the these activities and the fact that there are no officials from the Fisheries commission at Yeji to monitor and regulate the activities of the fishermen along the banks of the lake. When contacted she refused to comment on the issue. She told this Journalist through her secretary that she could not grant interview to this journalist on the issue posed to her.

DDT is probably the most famous of banned pesticides globally because of the large public outcry in the US and Europe during the 1960's and 70's. This public attention followed the publication of Silent Spring by Rachel Carson which detailed the damage that pesticides were doing to the natural environment. DDT is toxic to many types of organism and can cause birth defects. It is believed to be a carcinogen, meaning that any exposure has the potential to cause cancer. DDT is also related to a range of other health problems in humans and other organisms. Additionally, DDT and other similar agro-chemicals are bio-accumulators. This basically means that it can remain in an organism and accumulate.

DDT was first banned in Hungary in 1968 with many countries following suit throughout the 1970's. Notably, DDT was banned in the US in 1972 and the UK in 1984. The Stockholm Convention, which bans the use of DDT and other persistent organic pollutants (POPs) globally, came into effect in 2004. These chemicals were banned for a reason.

A study estimated that 87% of farmers in Ghana used chemical pesticides on their farms. The most common pesticide used is lindane which is thought to constitute up to 35% of pesticide applications in Ghana despite it having been banned under the Stockholm Convention in 2009 (see Fianko et al, 2011).

Water bodies in Ghana, including the large Lake Volta, have been found to be contaminated with multiple pesticides such as DDT and lindane. This has a secondary contamination effect on lake sediments and freshwater fish. Contamination in food produce include, for example, lettuce in Kumasi in which levels of DDT have been recorded at 400 micrograms per kilogram (or 400 parts per billion). Fianko et al (2011), Darko and Acquaah (2008) and Laary (2012) all report pesticide contamination in multiple areas of the food chain and natural environment.

In the Upper East Region of Ghana, a 2012 report states that in late-2010 15 farmers died from suspected pesticide poisoning. A quarter of farmers surveyed had recently suffered health problems from inhaling pesticides because no protective clothing or masks are used when spraying (NPASP, 2012). Farmers using agro-chemicals are most at risk of poisoning and contamination, but because these chemicals are also making their way into the environment and food produce, the general public are also at risk.

Special Report
Powered By Modern Ghana
Tano Suhien Forest Reserve In 'Danger' — Residents Of Sefwi Wiawso Cry Out
Fact-Check: False! Mahama Did Not Distribute Cash To Supporters In Berekum
An Assessment Of NDC’s Manifesto On Climate Change Commitment And Food Security
US$10 Million Cocaine Saga: Narcotics Control Commission Official Spills The Beans
[Fact Checker] What Really Did Mahama Say About Zongos And Mortuaries?
Mahama Administration Did Not Borrow From BoG In 2016 — Seth Terkper Replies Facts Checker
Check Analysis Of Whether Ghana’s 2016 Register Was Bloated Or Not [Video]
Preliminary Report (III) On The Biometric Voter Registration Exercise By The Electoral Commission
Fact-Check: Did The NDC Gov't Issue A ‘Dumsor’ Timetable In 2016?
COVID-19 Updates Live Dashboard
TOP STORIES