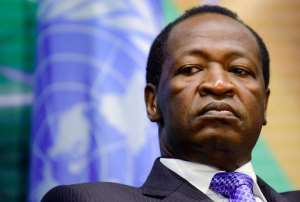 "We will ask Morocco... to place president Compaore at the disposal of Burkinabe justice," Zida said during a meeting with journalists in Burkina's capital, Ouagadougou.

Compaore fled Burkina Faso on October 31 after being ousted in a popular revolt sparked by his bid to extend his 27-year hold on power.

He first took refuge in neighbouring Ivory Coast before heading to Morocco on November 20.

The military seized power after he fled, but faced with intense international pressure eventually agreed to hand power to an interim government which will lead the west African country until elections in November 2015.

Zida, who led the military takeover and has since been named prime minister, vowed to root out widespread corruption after lawmakers met for the first time on Thursday.

Companies suspected of corruption will face audits and "if necessary we will nationalise (them), because what was built with the money of the people must return to the people," he said.

The military strongman also pledged to reopen the case of popular former president Thomas Sankara, who ruled between 1983 and 1987 before being assassinated in a coup led by Compaore.

Zida vowed that "justice will be done" in the case of the former president, who was a widely loved Marxist and pan-Africanist leader considered by many as the "African Che Guevara".

Interim president Michel Kafando has said DNA tests will be carried out to verify that the body buried at Sankara's funeral is really his.

An investigation will also be opened into the death of journalist Norbert Zongo in 1998 while he was investigating the death of a driver working for Compaore's brother, said Zida.

The first session of Burkina Faso's new 90-member interim parliament was held in a hotel, after the national parliament was torched during the violent anti-Compaore protests.

It includes 30 members from the opposition, 25 representatives from civil society groups and 10 members from Compaore's camp. The other 25 seats are held by the military.

One immediate decision by the new authority was to sack the former chief of state and Compaore loyalist, Gilbert Diendere.

Speaking ahead of a meeting of French-speaking regional powers in Senegal, the president of former colonial power France, Francois Hollande, said Compaore's ouster should serve as a lesson to African leaders.

Some 625 people are thought to have died during the two days of violent protests that saw demonstrators storm parliament and other buildings, ransacking offices and setting fire to cars.

In a wide-ranging interview with French media, Hollande said the popular revolt which ended the president's almost three decades of rule was "a sign that Africans are committed to democracy and constitutional order".

"I think this could serve as a lesson, to many heads of state, and not only in Africa, not to change the constitutional order out of personal interest," said Hollande.