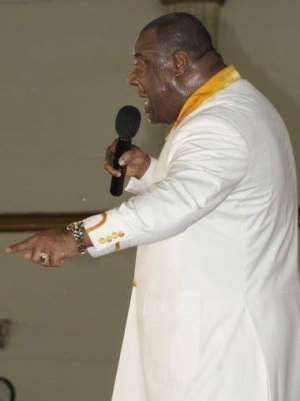 Archbishop Nicholas Duncan-Williams has said the “demonic” Ebola Virus Disease has targeted Ghana as its next destination between now and November.

“…I've declared another fast on Thursday because on Wednesday, I was resting and [at] 1 am, the Spirit of the Lord woke me up and He said: 'Are you sleeping?' And I said: 'Yes I'm sleeping', and He said: 'Wake up!' So I did and He said: 'You have to go into prayer because the Ebola virus is looking for a door to enter your country between October [and] November'. So I'm telling you, you can write it down. I don't just say things. I put 38 years of credibility on the line. So if I don't hear, I don't talk. When I say it you better believe it', the founder of the Christian Action Faith Ministries told his congregation at the Church's headquarters on Sunday October 12, 2014.

So far, there have been more than 8,300 confirmed and suspected cases of the haemorrhagic fever, and at least 4,033 deaths. Most fatalities - 4,024 - have occurred in the West African countries of Guinea, Liberia and Sierra Leone. Cases have also been reported in Nigeria, Senegal, DR Congo, Spain and the US.

Ghana has tested more than 100 suspected cases at the Noguchi Memorial Institute for Medical Research (NMIMR) but none has proven positive.

The government of the World's second-largest cocoa producer has put in place measures to contain a spread of the diseases should it break in the former British colony.

Duncan-Williams says fervent prayer and fasting are imperative to stave off an outbreak in the world's major gold producing country, which has a population of about 25 million, as occurred in Liberia and the other West African countries reeling under the “plague”.

“When I went to Liberia early this year, I said to the president, I said: 'Madam President, call all the pastors, the bishops the churches to begin a fast once a month at the stadium every Friday and attend yourself: there is an impending danger ahead between now and 2017'. I Met with the vice president and the senate, told them the same thing. Met with all the bishops and the pastors…and told them: 'You'll have to put aside differences and start meeting to fast and pray for your land'. The Lord didn't tell me that there was a virus coming to Liberia, He didn't tell me that. He said an impending danger. The rest is history”, the renowned Charismatic preacher mentioned.

According to him, “We need to fast and pray and deal with this Ebola virus that it won't cross our borders. That it won't enter into this country”.

“I am not a prophet of doom, but I can perceive and I can smell things and when I smell things in the pipeline, my assignment is to announce it, how you deal with it is up to you…. The enemy has an agenda”, the cleric said.

“…The bottom line is that there are people who want to see the virus in this country and they want our name on CNN. We cancel it by the blood of Jesus. That is not to say that we are better than those countries. We are not. But let's also pray that the plague will cease in those countries…I believe in what I've seen and I believe in what I've heard and I stand by it…Spiritually, I tell you that the plague, whether it's a conspiracy of White man, Black man I don't care. I just know that this thing is demonic. Anything that kills people the way it's killing people is demonic. I don't care what is behind it, but I know something; when I lift up prayer, there has to be divine resolution to the matter. Because prayer knows no boundaries and prayer knows no limit…” Duncan-Williams said.