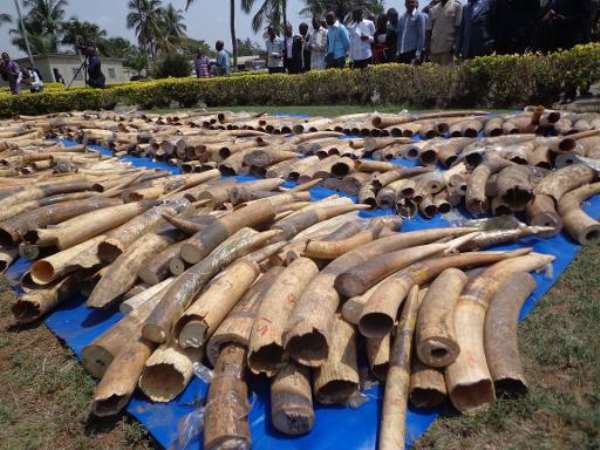 Lome (AFP) - A shop owner dubbed "Le Patron" (The Boss) because of his status as Togo's top ivory smuggler was jailed for two years on Wednesday for possessing more than 700 kilogrammes of elephant tusks.

A judge in the Togolese capital Lome handed Emile N'Bouke, 58, the maximum sentence possible after he was found guilty of ivory trafficking, which has been banned worldwide since 1989.

N'Bouke, who was arrested in August last year, was told he would serve only 15 months but was also fined five million Central African Francs (7,600 euros, $10,300).

Two co-defendants, Guinean nationals Djifa Doumbouya and Moussa Cherif, who were arrested at the same time and found with between three and six kilogrammes of ivory, were also jailed for two years and fined the same amount.

Cherif was found guilty in his absence and is currently the subject of an international arrest warrant.

State prosecutor Blaise Kanmanpene said the judge had taken into account the need to protect elephants but called on Togo to look again at its laws on ivory trafficking to provide for tougher sentences.

Defence lawyer Claude Amegan, however, said his clients should have been released as the state had not proved that the seized contraband was acquired after the introduction of the international ban on trade in ivory.

Togo has in recent years increased its efforts to stamp out trade in elephant tusks killed by poachers to be sold for high sums, particularly in Asia.

Some 4.5 tonnes of ivory were seized between August last year and January, and 18 people arrested. The biggest seizures were on January 23 and 29 at Lome's port, when 3.8 tonnes were discovered in containers bound for Vietnam.

On June 8, police found 125 kilogrammes in a vehicle in the capital.

DNA tests have been carried out on samples of tusks, allowing police to determine their origin as well as the age of the elephants killed.

The first results indicated that the consignment seized in 2013 came largely from Ivory Coast, Ghana, Guinea and Liberia as well as Cameroon, Congo, Gabon, the Central African Republic and the Democratic Republic of Congo.

Trade in ivory was banned in 1989 under the Convention on International Trade in Endangered Species of Wild Fauna and Flora (CITES).

CITES and other animal protection groups have warned that as many as 20 percent of the continent's elephants could disappear within a decade if current poaching rates are not tackled.

An estimated 22,000 elephants were killed illegally in Africa in 2012, the groups said.