Ghana; Now A Land Without A Conscience?!!! 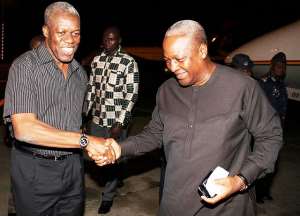 I believe the answer to my question is a simple "YES", and these are my 5 reasons;

1. Jackie Appiah, John Dumelo, Becca Acheampong and 17 other so-called Ghanaian celebrities are being taken on a jolly-ride to brazil for sight-seeing at an astronomic cost of $26,000 each.Now,these very people, just a couple of months ago, were on a sensitization campaign with Alfred Vanderpuije in areas like Chorkor, Glefe and other deprived areas within greater Accra and also raise funds for construction of toilets for residents of these areas.

But as we speak, not a penny was raised for a single toilet to be built for these people.However, the tax monies of these very deprived Ghanaians are being expended on this bunch of so-called celebrities on a damn useless jolly-ride to Brazil. On the contrary, when American celebrities embark on trips to visit American soldiers on battle-fields abroad to motivate them, they do so from their own pockets and even make donations both in kind and cash to their compatriots.

2. When the 2008 presidential election was inconclusive after the first round and we had to go to Tein for the decider, Bishop J Agyin Asare and ARCHBISHOP NICHOLAS DUNCAN WILLIAMS stood in-front of their congregation, and from their pulpits, openly castigated president John Agyekum Kufour for keeping silent and making Ghana look like a "child without a father" because in their thinking, there was so much tension in the air and therefore was incumbent on the sitting president who was the father of the nation, to speak and calm nerves.

But as to what exactly these personalities wanted Kufour to talk about still remains a mystery since nobody had made attempt to subvert the constitutional order which was smoothly in motion.However,these two people who have accumulated so much wealth by turning the gospel of Christ into a full-blown money-making enterprise, not long ago, were just about to enplane to Israel on a damn useless trip to pray for the inept John Dramani Mahama-led NDC government, with the price tag being borne by ordinary Ghanaian taxpayers. That useless trip was later abandoned following a huge public outcry which pricked their dead--wood consciences.

3. Civil society organizations which have, hitherto, been very critical of current NDC government, have suddenly metamorphosed into praise-singers because they were taken to Senchi to enjoy exquisitely-spiced and delicately-grilled delicious 'banku-tilapia', drink choicest wines and have cozy nights with prostitutes in-between the sheets.

4. The media and its practitioners, which is suppose to serve as mouth-piece of ordinary citizens, keep check on state officials and scrutinize how our nation's resources are being expended, have all sold their already non-existent conscience and evaporated professional ethics on the altar of well-stuffed black-polythene-bag grabbing. As a result, they rather sing the praises of damn corrupt government officials and allow them to get away with murder, literally.

5. The judiciary, which is the last hope of defense for the defenseless, gave the good people of this nation; a damn hefty kick-in-the-tooth when it blatantly turned our laws on its head by substituting "SHALL" with "MAY" during the 2012 election petition.

So my question is; who now qualifies to hold the mantle as our nation's unblemished CONSCIENCE that can speak with authority and be a voice for the down-trodden masses of our dear nation?