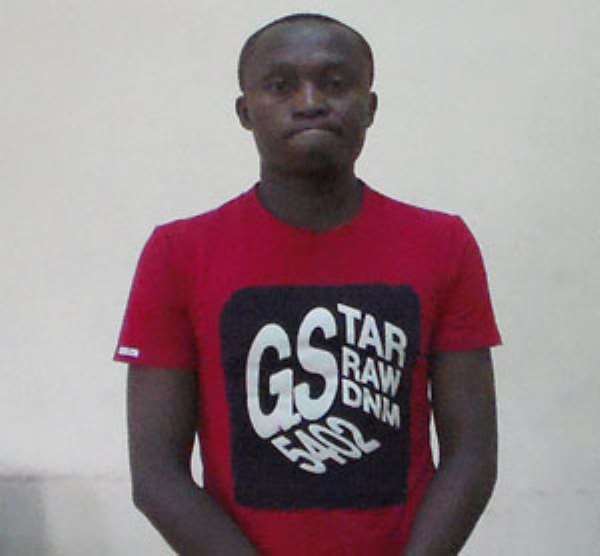 Amidu Sani, the suspect.
Twenty-seven-year-old Amidu Sani, a resident of Accra, has been arrested by the police for allegedly stealing from some students of Sikkim Manipal University (SMU) in Accra.

The suspect was reported to have visited SMU on April 1, 2014 pretending to be a student of the university who had come to write his end of semester exams and ended up picking up the bag of one of the students who was writing an exam at the time.

The suspect took away the bag which contained a laptop, four mobile phones, a cash amount of GH¢1140 and a passport belonging to the victim and his colleagues who are all students of SMU.

The victim after writing his exam came out searching for his bag containing the electronic gadgets and his passport but to his utmost surprise, it was nowhere to be found.

The victim then decided to report the case to the authorities of the university. Upon reporting the case, a CCTV's footage was played to him and the suspect was seen taking the said bag and making his way out of the building through the university's elevator.

The following day, the suspect again went to the school, still pretending to be a student of SMU who had come to write his exam, when the victim spotted him.

The suspect was subsequently arrested and handed over to the Nima police of the Ghana Police Division.

The suspect, according to Detective Lance Corporal of Nima Divisional Police, Bridgette Nyarko Kusi, was sent to court and remanded into police custody to reappear on April 27, 2014.