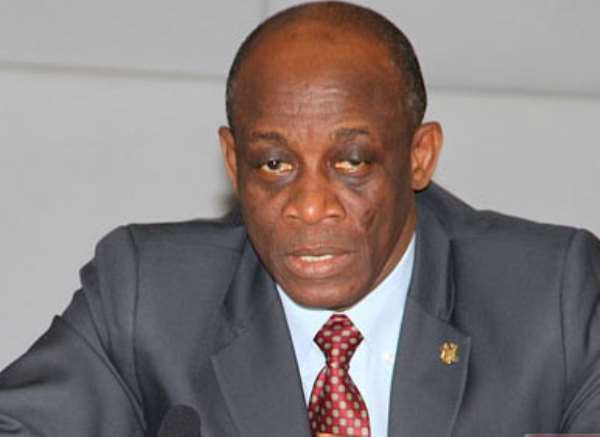 Seth Terkper, Finance Minister
Churches engaged in profit- making businesses must fulfil their tax obligations to the state or face the full rigours of the law, says Mr. Seth Terkper the Minister of Finance and Economic Planning.

He cited profit making ventures such as schools, micro finance institutions, transportation as some of the profit making businesses that religious organisation were engaged in, and yet failed to honour their tax obligations.

The minister made the observation, yesterday when he inaugurated Ga Presbyterian (GAP) Micro Finance Limited of the Ga Presbytery Church of Ghana in Accra.

'Jesus Christ instructed His followers to pay tax and obey the laws of the land. So religious bodies that operate profit making businesses must respect the laws governing the country,' he said.

Mr. Terkper said the numerous challenges such as unstable power supply, water shortages and the lack of infrastructure in schools and hospital could have keen resolved if religious organisations paid the necessary taxes due to the government.

He said although the government acknowledged the efforts of religious institutions in national development, their contribution to government through the payment of taxes, could have improved the current status of the economy.

He said even some religious institutions who honour their tax obligations had not been paying the appropriate amount to the state and warned that the government, through the Ghana Revenue Authority (GRA) was developing a mechanism to deal ruthlessly with such organisations.

'In order not to embarrass any religious organisation at the law court, I am urging all of them to fulfill their tax obligations which is a social responsibility of every citizen,' he said.

Mr. Terkper commended the Presbyterian Church of Ghana for its continuous contribution towards the development of the country, adding that the establishment of the GAP micro finance would have a positive impact on the economy.

'Whether Ghana is a developing or a middle income country, small and medium enterprises actually build the pillar of the economy,' he said.

The chairperson of the presbytery, Dr Nii Noi Odorkor, noted that the establishment of the micro finance was to meet the financial needs of members of the church and the nation at large.

He said the Presbyterian Church would continue to implement projects that would positively impact the lives of its members and the nation and urged other religious groups to emulate them.

The board chairman of GAP Micro Finance, Mr. Joe N.B. Tetteh, said that GAP micro finance would use the Presbyterian Church of Ghana's leverage of discipline, conviption, integrity and commitment to help its members and the public at large.

Speaking to the Ghanaian Times, the Moderator of the Global Evangelical Church, Reverend Dr Edem Kwaku Tettey, said it is against the doctrine for religious organisation to ignore tax.

He quoted Roman's Chapter 13 to back his assertion, adding that 'Everyone must submit himself to the governing authorities, for there is no authority that God has not established. The authorities^that exist have been established by God'.

He explained that the above quotation, encourages religious group to pay tax to authorities who give their full time in governing the country stressing that ' the Bible continue to say that give everyone what you owe him if you owe taxes, pay taxes if revenue, then revenue, if respect then respect, if honour then honour'.