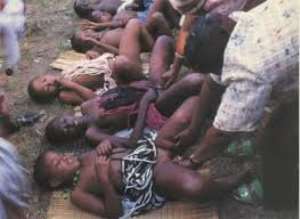 The world's first clitoral repair hospital for victims of female genital mutilation (FGM) would open in Bobo-Dioulasso, Burkina Faso on March 7, this year, for victims in West Africa.

A statement issued by the US-based nonprofit organisation, Clitoraid, and made available to the Ghana News Agency, said experts would perform clitoral surgeries and also train interested surgeons to restore FGM victims to sexual and self-dignity.

It said the state-of-the-art facility, called the 'Kamkaso,' which means 'the house for women,' and again nicknamed 'the Pleasure Hospital,' was built with donation from worldwide volunteers and philanthropists totaling 400,000 dollars.

The statement said Mrs Chantal Compaore, First Lady of Burkina Faso, would preside over the ceremony for her steadfast voice against the horrors of FGM.

Nadine Gary, Clitoraid Communications Director, said hundreds of women were already on their waiting list to undergo the surgery, which would be free of charge noting that “there are about 135 million FGM victims in the world, most of whom live in Africa. Their wait is almost over,' Gary said.

She said: 'The surgery will restore victim's dignity as women as well as their ability to experience physical pleasure, which was taken from them against their will through the barbaric horrors of FGM.'Gary said Clitoraid volunteer surgeons from the United States, Dr. Marci Bowers and Dr. Harold Henning Jr. would be available for the surgeries.

'The goal is to help as many victims as possible have this surgery, which will also help discourage the barbaric practice of FGM,' Gary said. Giving the historical antecedent, Gary said the founder and spiritual leader of the International Raelian Movement, Maitreya Rael, established Clitoraid and the idea of building clinics that offer free surgery for FGM victims after Dr Pierre Foldes developed the clitoral repair procedure in France.

There has been universal agreement that it is a violation of human rights and against the integrity of individuals as was adopted by the United Nations in a resolution banning the practice.

'Eliminating FGM is essential for women's health, so governments should continue to keep passing laws against it. It is also important to repair the damage already caused to victims, hence the result of his vision,' she said.

“Sexuality should be considered one of the basic human senses…imagine if we took our children and poked their eyes out in childhood or their sense of hearing or even smell,” she said .

Last year Dr. Pierre Foldes – the pioneer of the surgery – and his colleagues published a study in the Lancet indicating in 11 years, his team operated on nearly 3,000 women.