Is Mahama To Blame For Ghana’s Weak Economy? Yes But…..We All Need To Help 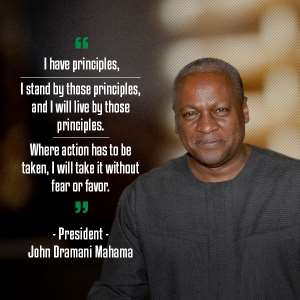 Because Ghana is operating an Executive Presidency the President is to blame for any economic mishap. All former presidents Rawlings, Kufuor and late Mills were blamed for economic woes in their terms in office. This is because during campaigns the presidents made promises that they vowed to fulfill in accordance with their parties manifestoes. However during the reality check on the performance of the economy, being run through many appointees, the president is required to open up to the nation.

He must come out to explain the causes of his failure to achieve his campaign targets. In the case of President Mahama he has come out alright by admitting the difficulties facing the economy. But he says that it is nothing unusual because economic problems are universal currently with nations high and low going through difficulties.

However before he and late Mills came to power in 2009 Ghana owed about $9billion at a time Ghana was not an oil economy with cocoa and gold. Today Ghana is said to owe $15bn with some people saying our debt profile is jumping to reach $25bn. Government has come out to explain that it is investing all the foreign cash on infrastructural development such as roads gas projects and the more all over the country.

Currently we are suffering from over expenditure on government budget allocations. The public accounts committee has also uncovered in government offices and illegal use of government funds. Interest payments on loans owed to internal and external creditors are mounting to the extent of becoming difficult to manage. Ghana is suffocating through interest payments, a situation that requires collective intervention. “All hands on deck” is the clarion call by many well meaning citizens.

Ghana has slipped away from a single digit inflation making it impossible for government firms, importers and traders to make informed projections with their local and foreign transactions. Ghana's over dependence on imports has affected the value of our local currency to the extent that the cedi is in a free fall against the dollar and other currencies. The measures introduced by the bank of Ghana to halt the free fall of the cedi can only help matters if every private and government firm and establishment is made to quote prices in cedis instead of dollars. It remains to be seen if the measure would be respected by all in Ghana including our estates developers, hotels, restaurants, traders and sea and airport establishments.

Since independence we have not been depending on home grown development plans but ones approved by the Breton woods i.e. the World Bank and affiliates. We also depend on foreign imports of items that can be produced locally. Interestingly we learned our tastes from our colonial masters and the western world from whom we seek advice to run our economy. Even when we decided to wean ourselves from our foreign benefactors by going for Eurobonds to finance our programs, we are unable to manage our finances with lots of baggage on judgment debts, dubious loans and grants to unproductive firms. We also spend the bulk of the cash on our benefactors who come as experts and advisors. Government is currently in court to retrieve large sums of money paid to organizations which had no contract with government. But it is taking some time to achieve our aim.

Ghana is now faced with high tariffs of electricity due to high cost of production and reliance on expensive crude oil to power electricity. Our hope to complete our gas project at Atuabo on time to provide us cheap electricity seems to have hit a snag. The project would no longer be completed in April as promised us by Dr George Sipa Yankey the Chief Executive Officer of the Ghana Gas Company to augment hydropower and provide cheap power to the nation. We ought to commend the government for completing and commissioning the Bui Dam. But electricity would be expensive if Atuabo Gas Project said to be 90%complete by the Ministry of Energy and Petroleum fails to provide cheaper gas. The net effect of the current situation is that the cost of doing business would affect cost of living to affect the pocket of workers, farmers and the general public.

As you can see the issue of solution to economic difficulty must become a collective responsibility. But in the current dispensation the blame is placed at the doorsteps of the president. The difficulties we are faced with did not start with the current government .Yet President Mahama has the responsibility to bring all including the opposition, civil society, labor and the business sectors to do the following: organize an all party economic conference to examine the economy and provide solutions without prejudice to the measures already taken by government. This way all involved would get to know their roles in revamping the economy.

The winner takes all system in the constitution is not good for a nation that need to work together. The advice we wish to give the president is simple. Come out to do as former president Kufuor once did regarding the size of his government, by saying that “When I was not in power I saw things differently. Today as I am in power I now know it is not easy to run a nation especially after promising to help Ghanaians out”. When this is done the people of Ghana who are loving and forgiving would understand and forgive the president.