Dr. Papa Kwesi Nduom: The Economy & The Cedi, Our Government Must Show Us The Way 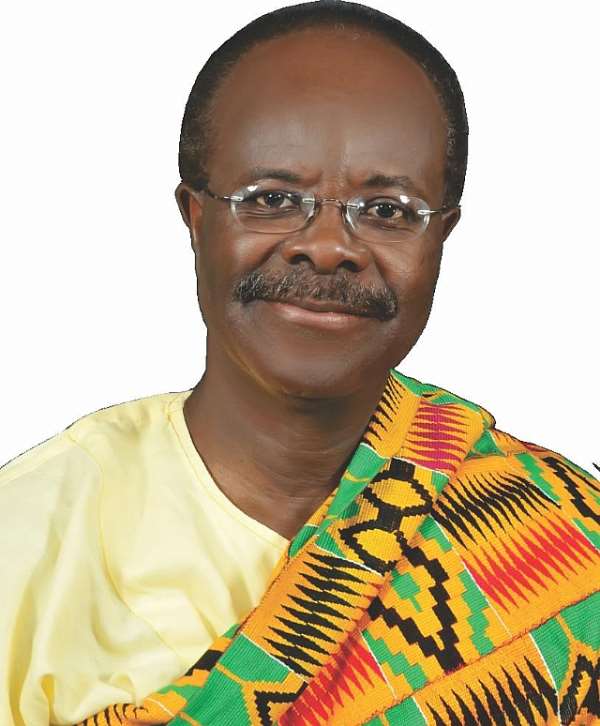 This past week, many people - economists, politicians, business owners, religious leaders, etc., have talked about the need to restructure the foundation of our economy in order to solve the problems we face. We nearly succeeded in pushing the usual political topics off the discussion agenda. I am happy that some of those talking publicly about the economy and cedi depreciation have tried to take political propaganda out of their presentations, for the most part.

Unfortunately, Ghanaians as usual have resorted to slogans – “Guggisberg economy”, “Tweaaa Economy”, “Economy lacks fundamentals”, “Dollarisation”, “External Shocks”, etc. We have this habit of reducing very serious matters to slogans, then descend into joke/fun-making and forget our troubles, for now until they hit us again. We must move from being experts at discussing problems to become excellent at implementing sound solutions. A number of people have repeated as a solution: "Production, production, production". This as if we have discovered the magic wand. But production has a pre-requisite: market, market, market. Ghana has not learnt to treat those who invest their hard-earned cedis and borrowed funds to engage in production of goods and services well by giving them reasonable assurance of the availability of a domestic market. We need to start that discussion and make the domestic market available. We need to adopt a new positive attitude about our own entrepreneurs, those who create jobs.

But over the past week, our government appeared to be in a big hurry to smooth over the problems we are facing. This is one temptation we must all resist. We are in this together so our leaders must not be afraid to face up to the challenge in front of us. They must bring all of us to the economic battlefront and lead us to victory.

I am on record that the cedi depreciation did not begin in 2014. It is not an NDC problem. It is a Ghana problem. It only becomes an albatross around an NDC neck if they refuse to recognize and deal with it:

“The reality is that the cedi, (re denomination or not) has depreciated consistently over the past 20 years, even as the GDP has grown and without regard to Ghana becoming an oil producing nation. We all know the reasons why. We import most of what we eat and use. Then we turn around and export our oil, gold, bauxite, cocoa, cashew, soya, pineapples, banana, timber etc as raw materials.”

So I know there is no easy and immediate solution that will wipe away the problem. I am prepared to make sacrifices now and win later. When the leadership appears to demand miracles and want to command solutions to appear and make us whole now, we postpone and drag the problems along. This is what causes me to worry.

We must understand our realities and work accordingly. There is no question that Ghana has been among Africa's top-performing economies in recent years. This though has been pushed by oil production in deep offshore waters in 2010, together with consistently high prices for its other main exports, gold and cocoa. The past couple of years have not helped as the fall in gold and cocoa prices, together with an import bill driven up by investment in oil and gas infrastructure, has placed steady pressure on the currency. This has been compounded by budget deficits consistently in the double digits. No one can dispute these facts and no amount of smooth talking will make these problems go away in an instant. So our leaders must prepare us to face this reality and give us a plan we can feel to make us confident to approach tomorrow.

The Governor of the Bank of Ghana, Dr. Kofi Wampah, drew government's attention in a call to action when he said:

“The uncertainties in the outlook and weakened domestic fundamentals underscore the need for continued tight fiscal and monetary policies and measures that would reduce the country's vulnerability to shocks, re-anchor inflation expectations and sustain macroeconomic stability,“ The Bank of Ghana raised interest rates by 200 basis points to 18 per cent as part of efforts to halt the steady depreciation of the cedi currency in the face of chronic trade and fiscal imbalance.

To me, the President and his Finance Minister should have stayed this course, explained the problems to us in ordinary language for us to understand and told us what we must do ourselves to begin to solve the problems.

Unfortunately, our President took a different path as to him, the resumption of donor assistance to Ghana will help in critical areas of the economy adding that the country is “looking forward to an exciting and promising new year….most of the challenges that faced Ghana last year have been properly and fundamentally addressed.” In addition, he promised that the 2014 being implemented by Ghana's economic management team headed by the Vice President, Paa Kwesi Amissah-Arthur is poised “to achieve a proper calibration of our macro-economic fundamentals to ensure that the economy continues to stay on a positive trajectory.”

The Minister of Finance & Economic Planning – Seth Terkper chose not to urge us to face the reality of the difficult situation we are in. He chose to cheer us on saying that the medium-term outlook for the economy remained strong and prospective but that hard decisions and measures were required in the meantime to correct the “volatilities in the system”.

Mr Terkper said some of the measures had already started yielding the right results. The cedi to him had stabilised and imports were becoming a little expensive. In 2012, when the Central Bank issued similar restrictions on foreign currencies, it reduced the value of foreign currency accounts from 30 per cent to about five per cent and the current measures are expected to yield even better results. What the Minister did not (could not?) say was that the nation had developed additional production capacity as a result of the measures put in place in 2012.

He said the government had also engaged with its development partners who have started disbursing about $700 million grants accumulated over the past two years and that should contribute to helping the government meet its budget deficit target of 8.5 per cent of GDP.

And then there was this comment this past Saturday from Dr. Tony Aidoo the man picked to represent our interests in the Netherlands as Ambassador:

"First of all I think it is unscientific, unintelligent and dishonest on the part of all those who believe that the phenomenon of recurrent depreciation of the cedi against its trading currencies is a function of financial mismanagement." Also, he said "That kind of assertion is dishonest, it is unintelligent, it has no intellectual foundation because the people talking I believe don't even know anything about economics much less the dynamics of international economics. If they were honest, they would have seen that this is a recurring phenomenon," he stressed.

Ghanaians do not have to be economists. But we need to be told the truth, the difficult realities of our economy and the tough choices before us. More important, our government must tell us what we must do – what our responsibilities are and what it is doing to encourage us to do what is difficult but necessary.