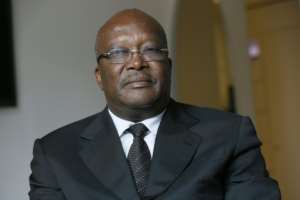 Ouagadougou (AFP) - Burkina Faso's new President Roch Marc Christian Kabore took the helm of the defence ministry in a government lineup unveiled Wednesday for a nation with a history of military trouble and coups.

Kabore, only the third civilian president of nine in office since independence in 1960, kept the defence and veterans' affairs portfolio for himself as had his predecessor Blaise Compaore, who was overthrown by an uprising in 2014.

Reform of the army consequently is a key issue for the future in a country with a legacy of military trouble.

Headed by Prime Minister Paul Kaba Thieba, a former economist and central banker, the 30-member cabinet has seven women, including Aridjatou Rosine Coulibaly Sori in the key post of Economy and Finance minister.

Longtime mayor of the capital Ouagadougou, Simon Compaore -- no relation to the ousted former leader -- becomes deputy head of the government and takes on decentralisation and interior security.

Kabore, who was elected with more than 53 percent of the vote in a presidential poll in November, has pledged to "reform institutions and modernise the government, for more social justice, democracy and freedom."

He vowed to build "a new Burkina Faso" by fighting youth unemployment, improving education and modernising the health system in the country of 17.4 million.

More than 46 percent of Burkinabe people live below the poverty threshold and around 70 percent are under 30 years of age.

Hundreds of thousands of people took to the streets in October 2014 when Compaore sought to extend his rule, forcing him to step down after ruling the country with an iron fist for 27 years.