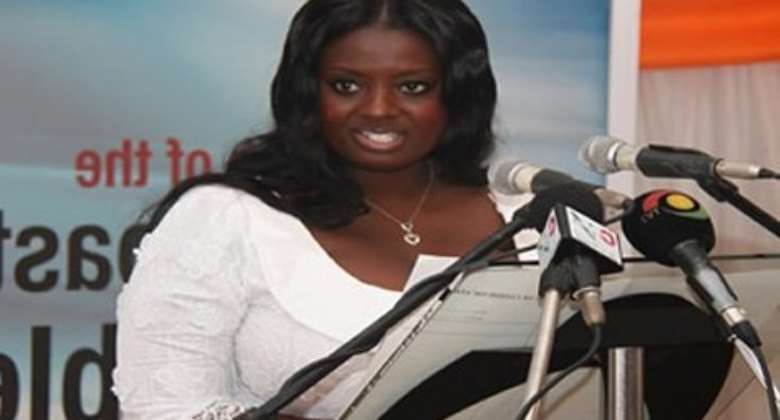 Miss Victoria Hammah, thanks for hammering Ghanaians left, right and centre, the NDC government front and back and last but not the least for fooling and disappointing President John Dramani Mahama for appointing you as a deputy Minister for Communication instead of Conversation.

Had it not been your tape, it was still unbeknown to each and every living ordinary Ghanaian (but not the politicians) that being a deputy minister does not carry any responsibility and weight.

Deputy Ministers rather, in accordance with your (Miss Victoria) tape, gains next to nothing. If anything, are they not in the Government to serve and protect the nation Ghana, or they are there to embezzle our coffers? Mama Victoria are you still on the line to answer me, or you have no more credit to talk?

The disclosure of Miss Victoria Hammah's dialogue has the fundamental keys to the numerous corruption issues embedded and emanating from a cross section of the NDC's, is it Camp or Government? Somebody help me here please.

Some of us now know that, there is no smoke without fire and for that matter, we shall all be now listening more seriously to the likes of the JJS and the AMIDUS for accurate information on corruption in the existing Government.

When you listen carefully to the conversation in the said tape, one could sense how stupid, ignorant and senseless they (most politicians and ministers) think the Ghanaian public are.

As a matter of fact, they are joking with our dear lives in their corrupted hands as a people. At a point, she even gave a hindsight, as to how one can haggle for a Ministerial position if that person is not happy as a deputy Minister.

This is due to the fact that according to her, being a deputy Minister does not fetch any waters (money). Probably they are being monitored under the watchful eyes of the main Ministers who are in control of the main Corruption Gate.

This assertion goes to open another Can of Worms for some of our Ministers in full position and as such has done our Mother Ghana more good than harm: investigation a la corruption galore.

It all depends on how the Ghanaian Media would pick and digest this available information from its many and diverse angles.

The Conversation on the said tape, has so many keys to so many Corruption Problems engulfing our Dear Nation Ghana.

This is the reason if not reasons why politicians or (politrick-cians as a Rasta man would say) should be left alone to fight their own cause among themselves. But what do we see?

All we normally see is the ordinary Ghanaian who is either naive, innocent, stupid, illiterate, poor and What Else as the musician Sarkodie would say, being used as a bait for their(politicians) selfish ambitions.

The biggest question now is that, are our women really, really I repeat ready for Politics in Ghana? Because even some of the men in politics cannot handle and tackle their own mess.

Someone would be thinking I am either a Sexist or being too Sexist, and another would be saying but women also need to start from somewhere. Yes, exactly somewhere but not in Ghana.

Although during the erstwhile PNDC to NDC era, Ghana saw some good women of substance and character whose intelligence and integrity stood the test of some hazard political tide. Gone are those days, so kudus to them and shame to the current ones who are performing abysmally.

Anyway a woman like her stature and calibre would not be short of employment for long, because my friends in the Ghana Film industry would be queuing at her front doors for a major role in VICKY'S 1MD(1 MILLION DOLLAR) PART 1 & 2.

In fact she should be good at acting, given her looks and the way she sounded on the tape, most especially the way she slangs by saying "yaa understand" in an American Twang to meaning Do You Understand.

As she was thinking of amassing the Dollar Currency, who knows how many Ghanaian Cedis she probably got stashed under her carpet.

From this indication, it would be an open play for all the Political Parties come 2016, and since there is a leeway within the financial state of Ghana, this situation calls for a major scrutiny, probity and accountability within the current administration of the NDC.

Excuse me, I am afraid as Tic-TAC the musician said in his song, the VICKY'S SAGA is going to be at the top and bottom of all jokes till we unearth another culprit from the Corruption Pot.

This is an avenue to cull all the political crooks out of their corrupted nooks and crannies. For now, the ball is in the court of the NDC government, and it could be very difficult for them to show Ghanaians that, they are clean (of corruption) and pure.

In all reasoning, debatably speaking, the African Political Terrain is just not conducive yet for the Female politician.

This should serve as a drastic warning, a massive lesson or a learning curve not for these politicians but for each and every sensible and ordinary Ghanaian.

As you can see, they (politicians) are only in Government for themselves and for that case, not even their very own families trust them. Hence the Disclosure of Mama or Aunty Vicky's Dialogue.