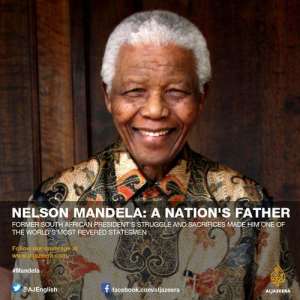 The 'Unmentionable' has taken an everlasting 'hostage' of a true and remarkable Soil of our land : Mr Madiba Mandela.

An Honourable Hero of Heroes from the African Continent, is gone but forget him not.

His Peace, Love, Courage and Sense of Unity transcended all continental boundaries and political echelons.

Now is the time for us not only to celebrate his Bravado and Wisdom, but also mourn his departure because to find another Madiba: who would be there for his nation, is just as equal to finding Satan in Heaven again.

At least he is argumentatively the only person who all races hail in the highest esteem.

Simply put, his calmness brought him from prison to the seat of the presidency in South Africa.

He is touted in some Quarters as
The Governor of Peace
In some Circles as: The Soldier of Tranquillity
In some Places as : The Captain of Ability
In some Areas as : The Man of Freedom
In some Ghettoes as : The Marshall of Unity and
In some Countries as: The Master of Stability.
We were all very proud of you when you were alive and kicking, we became prouder when you were sick, and proudest even when you have left us.

Mr Mandela, you are the only person who humanly deserves all the adjectives that would qualify you as has been seen, heard and witnessed. And in addition to all the accolades there are to be discovered.

Do I have more to say? Maybe yes and maybe no. But I will opt for the latter just to emulate you since you did not say much but did a lot.

So I would say TATA MADIBA AND SIKELELE AFRICA,
God bless African
let its (Africa) horn be raised
Listen also to our prayers
Lord bless us, we are the family of it (Africa)
Lord bless our nation,
Stop wars and sufferings,
Save it, Save our nation,
The nation of South Africa,
From the blue of our heavens,
From the depths of our seas,
Over our everlasting mountains,
Where the cliffs give answer.
Sounds the call to come together,
And united we shall stand,
Let us live and strive for freedom
In South Africa our Land.
And this is the Anthem that best embodies the life, work, image and atmosphere you lived for.

So to us, you would ever be known in the world as the man who added the Extra to the Ordinary by making it look and sound as normal as dying.

REST IN PEACE AS YOU GO.

Your quest to harmonise our country's religious diversity co...
11 minutes ago