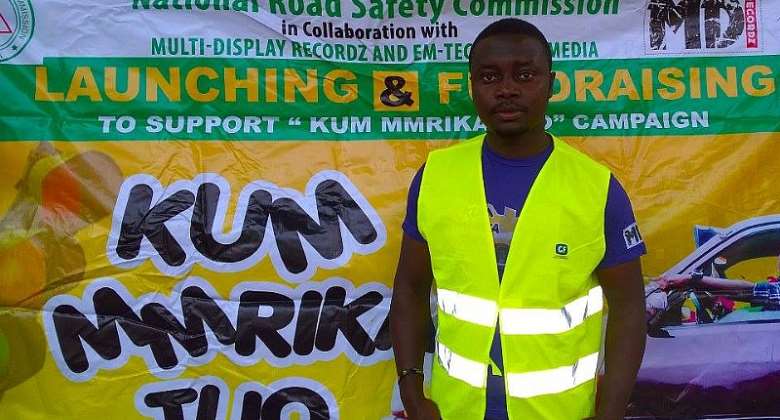 The ‘Kum Mmirikatuo’ Campaign seeks to bring to the attention of all who use the road to take a practical approach by desisting from acts that will encourage frequent road- accidents which have been a major problem causing havoc across the length and breadth of Ghana.

Some accidents either major or minor could possibly be avoided if the right approach and measures are safe-guarded and well put in place for the safety of life and property, as this campaign aims for.

Most road safety campaigners in Ghana mostly come out of their shells to announce the importance of road safety measures as and when seasons like Christmas, Easter and other Public Holidays are approaching.

But one young gentleman who has taken the herculean task of driving the ‘Kum Mmirikatuo Campaign’ tirelessly and endlessly, is Mr Prince Oheneba Afriyie Siaw-Gyamponsem.

As a young man doing this, he deserves all the push he wants and needs, both financially and logistically for the success of the campaign.

In an interview with the noble personality he said: “The necessity of human resources for increased output and productivity cannot be overemphasized in any national economy.

“However one factor that derails productivity is the non-availability of the human resource, which is also made possible by many factors including road crashes or accidents.

As to the main reason he is embarking on such a campaign he explains that “The persistent accidents on roads and highways in Ghana, particularly in the Ashanti region and its environs, resulting in many unfortunate but preventable injuries and deaths prompted the initiation of the ‘Kum Mmirikatuo Road Safety Campaign’ ”.

Enumerating the difficult aspect of the campaign, he said: “The greatest challenge has to do with adequate funds since the campaign is about money, and funding is always critical in the areas such as transportation to and from location for interviews and road safety demonstrations.

“And operational logistics like video cameras, laptop computers, brochures, fliers, banners as well as campaign paraphernalia like printed customized T-shirts among others.

He emphasized that “Additional competent human resource like cameramen, interview host and others are all costs associated with the campaign.”

Mr. Prince’s method of publicizing and announcing the ‘KUM Mmirikatuo Campaign’ sees him applying diverse means of communication, he stated that “My widely used basic communication media includes documentaries on a number of local television channels, interviews on radio stations as well as discussions in churches, schools and other public gatherings.”

Although the campaign has its hurdles here and there, he said: “It has been a success so far based on where we are intending to get with the campaign”.

In this light, all stakeholders whether private, commercial or corporate could help stop, limit or curb this social menace yielding devastating results.

‘Kum Mmirikatuo’ translates as ‘kill speeding’ in the Akan dialect.