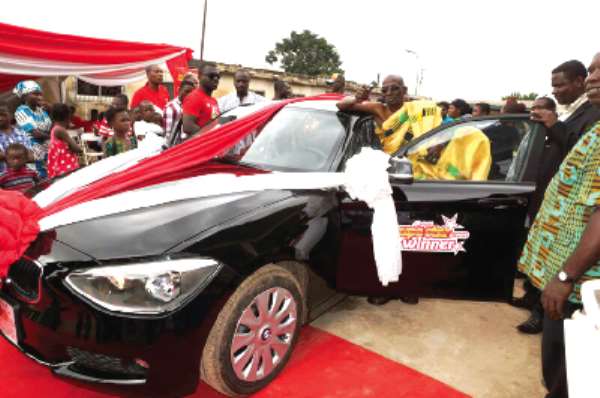 A 70-year-old chief of Manso Abram, a village near Bekwai in the Amansie West District in the Ashanti Region, has won the first BMW in the Airtel's Supa Star promotion.

Nana Ofori Ansah, a veteran of the Ghana Armed Forces, was presented with his brand new BMW vehicle at a ceremony at the VAG offices at Asawase in Kumasi.

He described the win as a dream and one he did not expect until he was presented with his prize.

Prior to the presentation, the Zonal Business Managers of Airtel in the Ashanti Region, Mr Emmanuel Sarfo, and Walter Tabi-Debbrah, led a convoy, which included the BMW, on a float through some principal streets of Kumasi.

The Airtel Supa promotion, which has been going on for  several weeks now, has seen thousands of Airtel users winning Samsung phones, cash, shopping vouchers, and trips to Brazil.

There are still two more BMWs to be won in the promo.

The Marketing Director of Airtel Ghana, Mr Ashish Malhotra, said, 'What we have done for Nana Ofori Ansah and his family and friends is to give them a double celebration, that is a brand new car, and a victory for the Black Stars for the World Cup qualifier'.

He added that Airtel was happy to see people throughout the country win in the promo. 'We have had winners from the northern region, across the middle belt and the coastal areas winning lots of prizes,' he said.