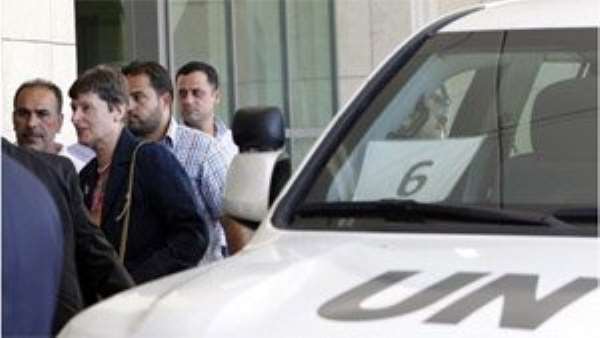 The Syrian government and the rebels agreed to a ceasefire to allow the inspectors to collect evidence safely.

However, Western governments criticised Syria for taking too long to allow in the UN team.

Syrian President Bashar al-Assad warned the US against military intervention, saying it would end in failure.

“If someone is dreaming of making Syria a puppet of the West, then this will not happen,” he told the Russian newspaper Izvestiya.

The US says there is little doubt Syrian forces used chemical weapons in the attack, which reportedly killed more than 300 people.

Mr Assad dismissed the accusation as “an insult to common sense”.

Syria's stockpiles
A year ago, US President Barack Obama said the use of chemical weapons by the Syrian government would be “a red line” that could trigger US military action.

Washington has bolstered its naval presence in the eastern Mediterranean, and military leaders from the US, UK and their allies are meeting in Jordan.

UK Foreign Secretary William Hague told the BBC that action could be taken without UN approval if there was “great humanitarian need” in Syria.

Turkey's Foreign Minister Ahmet Davutoglu said more than 30 countries were discussing how to act on Syria if the UN cannot agree.

He told the Milliyet newspaper Turkey would join any coalition against Mr Assad's government, with or without UN backing.

The suspected chemical strike occurred in the Ghouta area of eastern Damascus, which is under the control of rebels fighting to depose Mr Assad.

The UN inspectors will have to pass through both government-held and rebel-controlled areas to get there.

The 20-member UN inspection team has been in Syria since 18 August to look into three earlier suspected chemical attacks.

Correspondents say their mandate was to determine whether such weapons were used, not who was responsible for unleashing them, and there is no indication that the mission's brief has changed.

They are expected to take soil, blood, urine and tissue samples for laboratory testing.

It is one of seven countries that have not joined the 1997 convention banning chemical weapons.