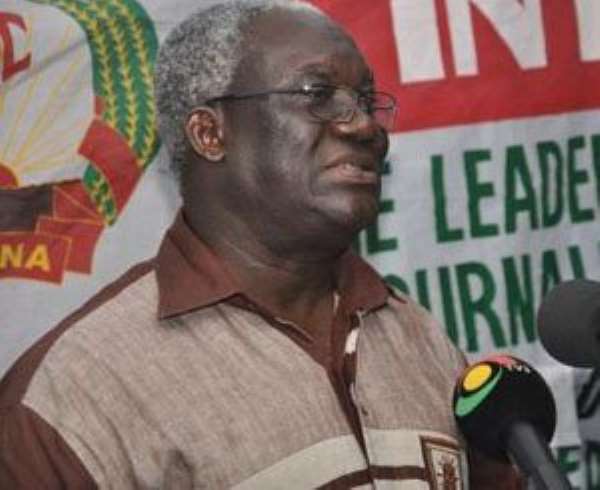 The Trades Union Congress (TUC) says the inability of politicians to allow technocrats to administer the pay system has contributed to the gross mismanagement of the public sector compensation system in recent times.

Making reference to the Auditor Generals' Report for 2011, which highlighted the numerous salary-related malpractices in Ministries, Departments and Agencies (MDAs), it said, 'What government needs to check and concentrate its efforts on is the large-scale mismanagement, as well as pure corruption which have engulfed the country and led to leakages on the revenue side and waste on the expenditure.'

Kofi Asamoah, the General Secretary of TUC, who made this known at a press conference in Accra, said the recent revelation on SADA and GYEEDA are sufficient reminders of the management challenges with the public purse.

There are elements in government that are calling for the suspension of the Single Spine pay policy, he said.

'Such groups were also the loudest in touting the achievements just a year ago using the single spine. Unfortunately they have no alternatives,' Asamoah noted.

He said, 'We, in the organized labour, are of the view that the single spine pay policy offers government the best opportunity to manage its compensation policy and with it a strong and well resourced institution to administer same. The alternative will be chaos.'

Mr Asamoah said at the start of the implementation of the single spine pay policy, Government's White Paper stated, among other things, that the new pay policy would be implemented in an averted pyramid over a five-year period.

In line with this, he said government indicated that adequate resources would be made available for the implementation of the policy.

'We are in the third year of implementation and government now claims the policy has been an albatross on its neck,' he added.

Mr Asamaoah revealed that in the past three years, the unions have been patient in forgoing negotiations on non-wage conditions of service including allowances.

'As part of the roadmap, some of these issues are due for negotiations this year. Sadly, government is dragging its feet on even the base pay itself.'

There are challenges on how to resolve post migration issues and sustain the policy itself, he said.

Mr Asamaoh said, 'We welcomed the initiative by the Ministry of Employment and Labour Relations and the Presidency to convene a forum on the Single Spine Pay Policy to agree on the way forward for the policy.'

He urged government and its communicators to stop the bastardization of the Single Spine Pay Policy, public sector workers and their unions.