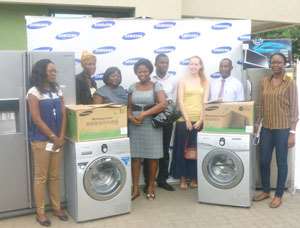 Samsung Electronics Ghana Limited has donated products worth GH¢15,000 to four orphanages at a ceremony held in Accra.

The items include Samsung refrigerators, washing machines and microwave ovens.

Samsung products were given to the orphanages as part of efforts by the company to support the needs of the inmates.

Richard Nunekpeku, Marketing Manager for Customer Electronics at Samsung, presented items to representatives of the orphanages.

He said the donation is an extension of the just-ended Samsung Chelsea Youth Football Camp which saw 54 the participation of children from four orphanages.

'We fervently look out for opportunities where we can make an impact. We sometimes do it on our own or partner with other bodies to achieve this objective. We have a great deal in common with people who never give up. Raising hundreds of children who are less privileged undoubtedly poses great challenges which could have forced these individuals to give up, but they did not', Nunekpeku said.

He said the company is excited in making a difference in the lives of children at the orphanages, adding that the success of the company will not be measured by how much money they have made, but how many lives the company improves.

They expressed gratitude to Samsung for the kind gesture and called on other corporate entities to emulate the gesture.