2013 is a busy year for NHIS – Sylvester Mensah 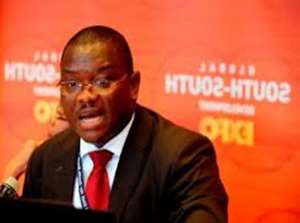 The Chief Executive of the National Health Insurance Authority (NHIA) Mr Sylvester A. Mensah has indicated that 2013 will be a busy year for the Authority. Addressing members of the core management team of the National Health Insurance Scheme and some key stakeholders at a management retreat held at Elmina from February 4-7, 2013. Mr Mensah noted that though tremendous progress has been made in meeting targets, there is the need to consolidate those achievements and make the scheme more efficient.

Among a litany of achievements recorded in 2012, he cited the passage of the new law, National Health Insurance Authority, 2012, Act 852, the upward review of provider Tariffs by 26%, creation of the condition to accommodate Family planning in the NHIS Benefit Package, development of a Consolidated Premium Account, the pilot of Capitation in Ashanti region, the establishment of an operational Call Centre and functional Clinical Audit division.

Mr Mensah told the management team that, “posterity will not forgive us if, in nurturing this infant institution, it slips into structural, operational, and financial inefficiency.”

According to him, 2013 will see the NHIS implementing a program on membership ID cards based on biometric data and providing Instant ID Cards to subscribers at the point of registration, piloting electronic claims (E-claims) processing, hosting an extended stakeholder review of the Capitation pilot in the Ashanti Region to inform its improvement and the subsequent nation-wide roll-out of this provider payment method. He said the NHIA intends to establish three more Claims Processing Centres in the Northern, Central and Ashanti Regions, to complement the centre in Accra. This he maintains would complete efficiency measures into claims management nation-wide.

Among other numerous initiatives, the Chief Executive disclosed that the scheme will be re-branded consistent with the new law, new vision and mission and operational architecture of the NHIS. The financial manual of the NHIA will also be reviewed to place greater responsibility on the centre for abuse and fraud occurring at the regional and scheme levels. A permanent and joint Clinical and Claims Audit team will be established to undertake forensic claims audit across the country, all year round to track isolated cases of connivance between schemes and providers.

Mr Mensah mentioned that subscriber satisfaction is a key performance indicator for the NHIA, therefore a subscribers' handbook detailing the benefit package, medicines and subscriber rights and obligations will be compiled and made available to all subscribers at the point of registration and membership renewal.

In order to further educate the public on the operations of the scheme, Mr Mensah hinted that a quarterly NHIS Policy Dialogue Forum to be beamed live on television stations, will be instituted.

Also, the NHIS Medicines list/pricing will be reviewed to reflect market realities.

He further said the Authority will begin modernizing and transiting from an ICT concept, “which places more emphasis on infrastructure, to a Management information System (MIS) which places premium on generating information for management decision-making.”

The President of the Ghana Medical Association (GMA), Dr Kwabena Opoku-Adusei who was present at the event pledged his Association's commitment to the NHIS. He assured that the GMA will continue to be a strong ally of the NHIS and will collaborate with the Authority on the roll-out of capitation across the country, if all their concerns are addressed. He also added that the GMA will continue to constructively criticize the NHIA to ensure that the scheme stands the test of time.

Other participants and contributors included the former Health Minister, Dr Richard Anane, under whose watch the law which established the NHIS was passed in 2003 (Act 650), and other foreign delegations.

The management retreat was under the theme, “deepening and consolidating the NHIS.”